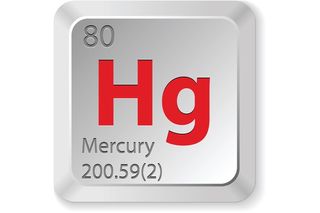 Mercury looks pretty, in its shiny, fast-moving liquid form, but don't touch! It can be extremely poisonous to humans.

The symbol Hg that mercury is known by comes from its Greek name, hydrargyrum, which means "liquid silver" — to reflect its shiny surface. The element is also known as quicksilver for its mobility. Named after the fastest-moving planet in the solar system, mercury has been known to humanity for ages. In fact, evidence of its use has been found in China, India and Egypt, and traces of mercury were found in 3,500-year-old Egyptian tombs.

Mercury is a very toxic element. It can enter the body through an open wound or by inhaling or ingesting it. It can then cause damage to nerves, the liver and the kidney, as well as a number of other symptoms.

Despite its toxic qualities, mercury can still be useful to us. The element conducts electricity and is used in electrical switches of thermostats and certain types of doze alarm-type alarm clocks, according to the College of Natural Resources at the University of California, Berkeley (CNR) "The place where people probably see it most commonly is in the new light bulbs — the compact fluorescent light bulbs," where mercury vapor is one of the chemicals used, said Daniel King, an associate professor of chemistry at Drexel University.

Due to its high density and compactness, mercury is also used to make thermometers, barometers and other scientific instruments, according to the Jefferson Lab. However, for safety reasons, consumer use of mercury in thermometers has become less common over the years, as digital thermometers have been introduced. In 2008, 13 states introduced laws that limit the manufacture, sale and/or distribution of mercury fever thermometers: California, Connecticut, Illinois, Indiana, Maine, Maryland, Massachusetts, Michigan, Minnesota, New Hampshire, Rhode Island, Oregon, Washington, the Environmental Protection Agency reports.

Mercury is typically found in the form of its common ore cinnabar — mercury sulfite — and can rarely be found on its own. To extract pure mercury, the ore is ground up and heated to the temperature of about 1,076 degrees F (580 degrees Celsius) with oxygen present in the process. Mercury vapor escapes from the ores and sulfur dioxide is removed, according to CNR. The metal is condensed and washed with nitric acid to purify it, and then distilled.

Mercury can form alloys with gold, silver, zinc and cadmium, which are called amalgams. Through those amalgams, mercury can be used to extract gold from rocks. When mercury comes into contact with gold, the gold dissolves into the mercury and then the two are separated, with the mercury being distilled off.

Mercury also forms compounds with other elements. Interestingly, one of such compounds — mercury nitrate — played a role in the coining of the term "mad as a hatter."

"Mercury was actually used in the making of hats from animal pelts," King said. In the 18th century people used the mercury nitrate compound to clean the pelts before they turned them into hats.

"And they discovered that a large percentage of the people who were working with those chemicals ended up suffering from brain damage," he said. "So the term 'mad as a hatter' actually comes from exposure to mercury."

Other common mercury compounds include mercuric chloride (HgCl2) — a highly poisonous salt and that was once used as a wound disinfectant. Another example is mercurous chloride (Hg2Cl2), also known as calomel – an antiseptic used to kill bacteria, according to the Jefferson Lab.Mercuric sulfide (HgS) is used to make a red paint pigment called vermilion, and mercuric oxide (HgO) is used to make mercury batteries.

Due to mercury's toxic potential, researchers keep stumbling upon ways in which the element may be harmful to humans and the environment.For example, scientists have argued about the potential toxicity of amalgam used in dental fillings that contains about 50 percent mercury. In a review of literature published in 2005 in the journal Gesundheitswesen, researchers found that exposure to mercury in dental fillings could lead to kidney and autoimmunity problems, neurobehavioral changes and even autism. "Removal of dental amalgam leads to permanent improvement of various chronic complaints in a relevant number of patients in various trials," the authors wrote in the review.

However, in another review, published in the Journal of the Canadian Dental Association, investigators came to a different conclusion, stating that: "The amount of mercury released from dental amalgam is minimal; a person would have to have 490 amalgam surfaces for there to be enough mercury vapor and ionic mercury given off from amalgam fillings to meet the maximum exposure guidelines."

Upon reviewing scientific evidence, the FDA concluded that "dental amalgam fillings safe for adults and children ages 6 and above," according to the agency's website.

There is also a growing body of research on methylmercury — the most toxic form of mercury — and its harmful effects on the environment and human health. People get exposed to methylmercury mainly through eating contaminated fish and seafood that pick up the toxic compound from the ocean. Elemental mercury, the same form of mercury that can be found in thermometers, gets converted into methylmercury by ocean bacteria.

"It [methylmercury] accumulates in the smaller fish that are then eaten by the bigger fish and it works its way up the food chain," in a process called bioaccumulation, King said. Methylmercury is particularly dangerous to developing embryos, which are five to 10 times more sensitive to its damaging effects on the nervous system than adults, according to the U.S. Geological Survey.

Mercury gets into the oceans from multiple sources, such as air and water pollution as well as naturally occurring minerals. Much of the mercury in the North Pacific, for instance, comes from air pollution, especially power plants in Asia, according to a study published in August 2013 in the journal Nature Geoscience. In another study, published in May 2009 in the journal Global Biogeochemical Cycle, researchers estimated that the levels of mercury in the North Pacific could double by 2050 if human-induced emissions continue at the current rate.