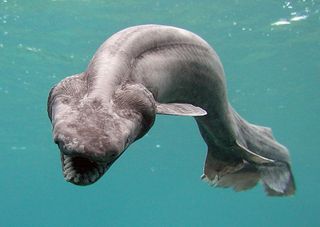 The ancient seas once churned with strange creatures that have long since vanished, leaving behind only small traces of themselves to anchor our imaginations. But recently, paleontologists got a rare glimpse of a primordial beast — the first nearly complete skeleton of an ancient shark belonging to the genus Phoebodus.

Phoebodus sharks, which grew to about 4 feet (1.2 meters) long, lived over 350 million years ago, long before dinosaurs and the nightmarish Megalodon came into the planetary story. But prior to this study, scientists didn't know much about what Phoebodus looked like. Because shark skeletons are made up of soft cartilage, rather than fossilized bone,  they deteriorate and vanish over time.

Indeed, the only evidence that these ancient sharks even existed came from discoveries of unique three-cusped teeth — that is, until a recent chance discovery on the Anti-Atlas Mountains in Morocco brought the group face-to-face with an almost complete fossil of the ancient beast.

A member of the Berber group, an indigenous group in northern Africa, first found the fossil and brought it to Christian Klug, a paleobiologist at the University of Zurich and senior author of the study. Klug immediately realized the specimen didn't belong to "a normal fish," said lead author Linda Frey, who was a graduate student at the University of Zurich at the time.

They discovered the fossil and a couple of other skulls belonging to the same genus in the southern region of the mountains in a 360-million-to-370-million-year-old layer of sediment that was once a marine basin. "The fossils are so well preserved," Frey told Live Science. "We were really happy about this discovery." The fossils were very well preserved because they were sitting in low-oxygen conditions, where decomposing organisms couldn't pick them apart.

An analysis of the fossils showed that the ancient beast had an eel-like body and a long snout, making it resemble the modern frilled shark (Chlamydoselachus anguineus), though the two types of sharks aren't related, Frey said. What's more, Phoebodus' jaw anatomy and three-cusped tooth shape suggest that the creature had a feeding strategy similar to that of the modern garpikes, a family of freshwater fish with long jaws. The garpikes "basically snap their prey in a fast motion," and this could also be how Phoebodus sharks fed themselves, she said.

Questions about Phoebodus remain and can't be answered with this skeleton.  The specimen is missing a perfectly preserved tail fin, which would tell them more about how the beast moved, Frey said.

The findings were published Oct. 2 in the journal Proceedings of the Royal Society B.