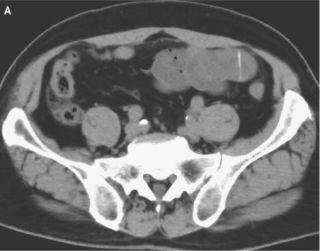 A fish bone pierced a hole through a man's intestine. Above, an X-ray showing the fish bone in the man's gut, in the upper right corner of the image.
(Image: © The New England Journal of Medicine ©2019)

After a man accidentally swallowed a tiny fish bone, it tore a hole through his intestine.

The 73-year-old man, who lives in Japan, went to the emergency room after he developed sudden and severe pain in his lower abdomen, according to a report of the man's case, which is published today (Aug. 21) in The New England Journal of Medicine.

During a physical exam at the hospital, the man had tenderness across his lower abdomen, as well as a slight fever. The man told doctors that, the day before his pain started, he had eaten yellowtail.

A CT scan of the man's abdomen revealed that his small intestine had been punctured by "a linear, high-density body." In other words, an object that looked a lot like a small bone was stuck in his intestine.

The man underwent surgery, and doctors found that a 2-centimeter-long (0.8 inch) fish bone had pierced straight through his small intestine.

To treat the patient, doctors needed to remove part of his small intestine. He also received antibiotics to ward off any possible infections that could have resulted from having a hole in the bowel. The man recovered well, and he was able to leave the hospital after eight days, according to the report, from doctors at the Kochi Medical School in Nankoku, Japan.

People accidentally swallow fish bones all the time. But it's rare for a swallowed "foreign body" to cause a tear in the intestine;  less than 1% of cases of an ingested foreign body result in such a tear, according to a 2014 paper published in the World Journal of Gastroenterology. Even fish bones, "despite their sharp ends and elongated shape," typically pass through the gastrointestinal tract without causing problems, the authors of the 2014 paper said.

When an ingested fish bone does cause problems, it more commonly gets stuck in a person's throat, according to a 2011 paper published in the Indian Journal of Radiology and Imaging.

People can lower their risk of swallowing fish bones by buying fillets, which tend to have fewer bones hiding in them than whole fish do, Healthline says. In addition, taking small bites and eating slowly can help lower the risk.