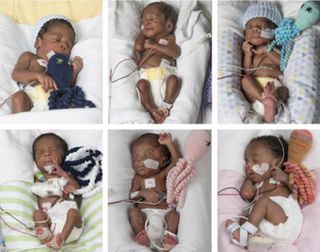 A woman in Virginia recently gave birth to sextuplets, after she and her husband had tried to conceive for nearly two decades. But how does such a high-order pregnancy happen?

The six babies — three boys and three girls — were born on May 11 at VCU Medical Center in Richmond, Virginia. The babies ranged in size from 1 lb., 10 ounces (0.74 kilograms) to 2 lbs., 15 ounces (1.33 kg) and required a 40-person team to coordinate the delivery. Prior to this pregnancy, the mother, Ajibola Taiwo, and father, Adeboye Taiwo, had tried unsuccessfully to become pregnant for 17 years, according to VCU Medical Center.

"It's not every day that parents bring home sextuplets," Dr. Ronald Ramus, director of the Division of Maternal-Fetal Medicine at VCU Medical Center, said in a statement. "Mrs. Taiwo was eating, sleeping and breathing for seven."

A multiple pregnancy, in which a woman is pregnant with two or more fetuses at the same time, happens either when a fertilized egg splits before it implants in the uterus (as is the case with identical twins) or when separate eggs are fertilized by different sperm (making fraternal twins), according to the Cleveland Clinic. [7 Baby Myths Debunked]

But pregnancies involving three or more fetuses are rare. Nearly 4 million live births occurred in the United States in 2015, and 3,871 of these were triplets, while 228 were quadruplets and just 24 were quintuplets or other higher-order births (like sextuplets), according to the Centers for Disease Control and Prevention.

It's very rare for such high-order pregnancies to happen naturally, without the help of fertility treatments.

"The chance for high-multiple gestations — four and above — to happen spontaneously, is extremely, extremely rare," said Dr. Avner Hershlag, chief of Northwell Health Fertility in Manhasset, New York, who is not involved in the sextuplets' care.

Fertility drugs increase the chances of a multiple pregnancy because these medicines stimulate the ovaries to produce many eggs. If some of these many eggs are fertilized at the same time, they can result in multiple babies, according to the University of Rochester.

In vitro fertilization (IVF) can also result in a multiple pregnancy, but this is less common today than in the past. That's because, in the past, the chances of becoming pregnant with IVF were quite low, so doctors would transfer multiple embryos to the uterus to increase the chances of pregnancy, Hershlag said.

"In the early days of IVF, [it] was still responsible for a high percentage of multiples, because it was not uncommon to put [in] three, four, five or even six embryos at a time," Hershlag said. But as researchers optimized IVF techniques, they increased the likelihood that each embryo transferred would result in a pregnancy.

"Our field has now moved to strictly limit the number of embryos transferred," Hershlag told Live Science. In general, almost all younger women treated at reputable fertility centers will have a single embryo transferred, he said.

Hershlag stressed that multiple pregnancies are associated with a higher risk of complications than single pregnancies, including an increased risk of preterm birth.

"High-multiple births is not a boon to any fertility center. This is not an achievement," Hershlag said. "While I'm wishing health and good outcomes ultimately to the couple that just gave birth to the sextuplets, I need to emphasize that such an occurrence should be long in the past. Fertility physicians should make a huge effort to transfer single embryos as much as possible."

All six babies are being treated in the neonatal intensive care unit and are doing well, VCU said. Ajibola Taiwo was released from the hospital on May 18, and she and her husband are actively participating in their babies' care, the statement said.