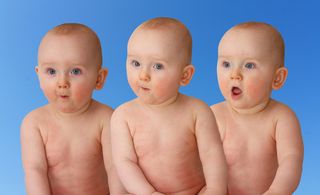 For two Baltimore parents, their three new bundles of joy may make them feel like one in a million, and statistics show they're not far off: Parents Thomas and Kristen Hewitt welcomed a rare set of identical triplets earlier this month, The Baltimore Sun reports.

The Hewitts' three boys were born more than six weeks early, on Oct. 6, the Sun reported. But having identical triplets is exceedingly rare, said Dr. Jonathan Herman, an OB-GYN at Long Island Jewish Medical Center in New Hyde Park, New York, who was not involved in the triplets' care.

Statistics help tell the story: Without the help of fertility treatments, and according to a mathematical rule that doctors use called Hellin's law, about one in 90 births is twins, one in 8,100 births (90 squared) is triplets and one in 729,000 births (90 cubed) is quadruplets, Herman said. [Seeing Double: 8 Fascinating Facts About Twins]

However, these numbers include both identical and fraternal babies. Identical siblings are much more rare: Only about one in 250 births is identical twins, according to a 2003 study in the Journal of Biosocial Science. Identical triplets are even less common, occurring about 20 to 30 times per 1 million births, the study found.

During the past few decades, fertility treatments have led to a rise in the rate of twins and other multiple births. For instance, the twin birth rate in the United States has increased more than 75 percent since 1980, and the triplet and high-order multiple births increased at an even higher rate, according to the U.S. Department of Health and Human Services.

In 2013, there were about 132,300 twin births, about 4,300 triplet births, 270 quadruplet births, and 66 births of quintuplets or higher-order births, out of about 3.9 million total births in the United States, according to the Centers for Disease Control and Prevention.

There are two main ways twin births occur. In the case of fraternal twins, a woman's ovaries release two eggs at the same time, which are then fertilized by two separate sperm. These babies develop at the same time within the womb, but the two children have the same degree of genetic similarity as any siblings, sharing about 50 percent of their genes.

Identical twins arise via a different route: A single sperm cell fertilizes a single egg, but then the single resulting cell splits into two identical cells, which have the same chromosomes. From this point on, the embryos may grow differently depending on their environments, but their DNA remains the same, Herman said.

In the case of identical triplets or quadruplets, the single fertilized egg splits into three or four genetically identical eggs, Herman said.

It's unknown why a fertilized egg sometimes splits, but identical twins tend to run in families, indicating that there's a genetic component, Herman said.

But these numbers are only for surviving multiples; sometimes, the fetuses of multiple pregnancies don't survive to birth.

"The more babies you have [at once], the more dangerous it is," Herman told Live Science. "There's a saying that twins are twice as much fun for the family, but three times as much trouble for doctors."

Births involving twins, triplets and quadruplets often have complications, including prematurity and low birth weight, Herman said. In those with a condition called twin-twin transfusion, one fetus siphons blood from the other, and is born with ruddy skin, while the other is pale and scrawny, Herman said. Women who carry multiples also have a greater risk of gestational diabetes, according to the American Society for Reproductive Medicine.

But the public continues to be fascinated with twins, and stories about identical triplets, quadruplets and quintuplets tend to make the news.

Such births also make a lot of work for parents. To tell their kids apart, the Hewitts have given each of their three boys differently colored strings to wear on their wrists and ankles, according to the Sun. And Kristen, a cosmetologist, plans to cut the boys' hair in different ways.

But her husband, Thomas, chuckled at the idea, according to the Sun, saying that it "will work, until they realize they can buzz each other's heads."