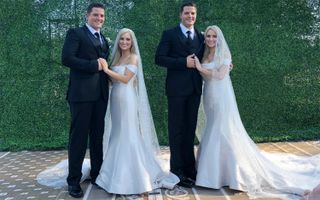 A couple of identical couples recently doubled up for life.

Identical twins Brittany and Briana Deane first met identical twins Josh and Jeremy Salyers last August at The Twins Day Festival in Ohio, according to ABC News. A year later, the couples had their weddings, together, wearing the same wedding outfits, at this year's Twin Day Festival. Their weddings were documented for a TLC special called "Twins Marry Twins," scheduled to air in 2019.

"In theory, we would expect their children to be genetically as similar as full siblings are to each other," said Laura Almasy, a professor of genetics at the University of Pennsylvania. Siblings born to the same set of parents share about half their genes with one another.

For every child that's born, "it's like drawing a handful of marbles from a jar ― you get half of your DNA from mom and half from dad," Almasy told Live Science. Cousins don't draw from the same jar. But in this case, the children of the two sets of parents would be drawing from two separate, but identical jars.

"So, the expectation would be that they would share half their DNA like full siblings would," Almasy said. But just like typical siblings, "any particular pair of individuals could share more or less" of those genes.

What's more, the identical twin parents may not have completely identical DNA; instead, there may be slight differences in their genes that could have occurred in the womb or because of environmental factors throughout their lives. These slight differences can also influence how similar the babies would be to one another.

"Environment doesn't affect which genes [babies] get from their parents," Almasy said. But the environment in which the parents grew up could change how an inherited gene is expressed ― in other words, how it turned off and on, she added. For example, if one mother smoked throughout her life and the other didn't, both babies could receive the same gene, but the gene could express and influence the baby very differently.