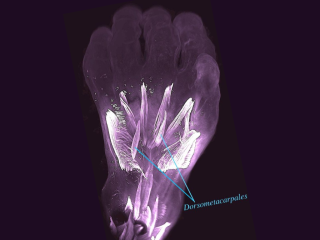 In the womb, developing humans grow extra muscles in their hands and feet that later disappear without a trace, scientists have discovered.

The temporary tissues, the researchers found, may be leftovers from our evolutionary ancestors.

The mysterious muscles can be found in limbed animals with more dexterous digits than ours, explained study co-author Rui Diogo, an evolutionary biologist and hominid paleobiologist at Howard University in Washington, D.C. Many of the muscles crop up in lizards, which sport fantastically wiggly toes, while a couple of them appear in mammals like chimpanzees, known for their flexible feet. However, in humans, the tissues either fuse to other muscles or shrink away to nothing before birth, according to the small study, published Oct. 1 in the journal Development.

The authors suggest that some of the transient muscles may have vanished from our adult ancestors more than 250 million years ago, as mammals began evolving from mammal-like reptiles. Given the study's small sample size, though, it remains to be seen whether these muscles appear in all human embryos and what that may mean for human evolutionary history.

"To me, the main [takeaway] is this idea that we have supernumerary muscles that are just transient, and then they are gone," said Alain Chédotal, a neuroscientist and developmental biologist at the Pierre and Marie Curie University in Paris, who was not involved in the work. The study needs to be replicated on a larger scale before any "big conclusions" can be drawn, Chédotal stressed, but the preliminary results pose interesting questions about prenatal development.

The muscles "were present [in the developing embryos] and then they were not, but then in-between, there's something that's not known," he said. "What is inducing this disappearance of the muscles?"

Looking under the skin

Though Chédotal was not involved in the current research, data from his lab fueled the investigation into fetal muscle development. In 2017, Chédotal and his colleagues published a collection of detailed 3D snapshots of human embryos and fetuses the likes of which had not been seen before. The team used a technique called "whole-mount immunostaining" to render the skin of their samples  transparent and highlight specific kinds of cells within the tissue. Using antibodies that latch onto myosin, a protein found only in muscles, the researchers captured various stages of human muscle development in high-resolution.

As an anatomist, Diogo had the skill to spot unusual muscles lurking in the images of fetal hands and feet, Chédotal said. Diogo pulled 13 3D images from the embryonic image database, representing embryos and fetuses between roughly 7 and 13 gestational weeks old. His team found that, at about week 7 of gestation, human fetuses have hands and feet that contain about 30 muscles each, but the number dwindles to just 20 about six weeks later.

For example, a muscle in the hand known as "contrahens 5" connects to the pinky finger and pulls the digit down and toward the midline of the hand. The muscle appears in adult monkeys and developing human embryos, but the researchers observed that around gestational week 10, the tissue begins to degrade and completely disintegrates before week 11. In the feet, muscles that lie between the metatarsal bones in the feet and pull the toes together fully form and then break down by week 9.

Though some muscles appeared to degrade or fuse into other muscles as early as week 7, some persisted well into week 11, "which is strikingly late for developmental atavisms," Diogo said in a statement.

"These are muscles that we know were present in our ancestors ... and they are still there," Diogo said of the transient structures. The muscular remnants are known as atavisms — anatomical structures that have been lost in certain organisms but might appear during embryonic development or in adults as variations or anomalies.

Although humans normally lose one-third of their atavistic limb muscles before birth, according to the study, on rare occasions, a muscle or two persists through the pruning and hangs around into adulthood, Diogo said. The lingering muscles often go unnoticed, neither causing problems nor granting their owner super-nimble digits, but appear to be significantly more common in individuals with developmental delays, such as those with Down syndrome or Edwards syndrome. It may be that people are more likely to retain atavistic muscles when they experience arrested or delayed development in the womb, the authors suggest.

The study provides the "first precise atlas" of embryonic limb development in humans, Delphine Duprez, a developmental biologist at the Institute of Biology Paris-Seine, told Live Science in an email. However, she added that the results have yet to be verified and may prove difficult to confirm, given that it remains "difficult to study muscle development in human embryos as compared to animal models."

In hopes of easing embryonic research, Chédotal and his lab members are continuing to build up their database of images. Now, they can tag up to eight tissue types with different antibodies at one time, meaning they can show how arteries, nerves and muscles interact in early human development. Muscles need to be hooked up to nerves and well supplied with blood to survive, so the detailed data may allow scientists like Diogo to piece together exactly when, why and how muscles disappear in the womb, he said.

The growing database, which is already available for public use, will eventually be adapted so that it is compatible with virtual reality and other platforms that enable users to interact with 3D images, Chédotal added. He hopes that the database will prove useful to everyone from acclaimed researchers to medical students, who up until now have studied fetal development from decades-old illustrations in textbooks, he said.

Diogo plans to use images from the database to study how the human head, arteries and nerves develop in utero. Beyond unearthing new details of human evolutionary history, Diogo said he aims to help medical professionals predict exactly what lies beneath their patients' skin. If researchers could predict which anatomical variations might be present in a particular patient, he suggested, doctors could be better prepared for surgery and generally deliver superior care.