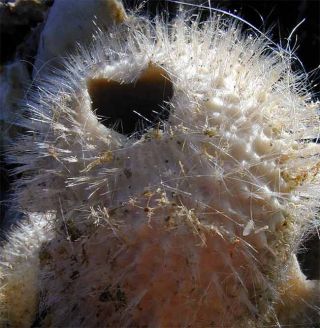 This glass sponge was discovered in the Weddell Sea.
(Image: © Armin Rose/German Center for Marine Biodiversity)

That natural bath sponge you use to scrub-a-dub-dub your body might not have a nervous system, but its cells possess many of the genes needed to make one. The surprising discovery, detailed in June 6 issue of the open-access journal PLoS ONE, suggests the evolutionary origins of the nervous system are much older than scientists previously thought. The study found that sponges contain about 25 genes that are very similar to human genes found in the “synapses” of nerve cells, called neurons. Synapses are bulb-like connections neurons use to communicate; in humans and many other animals, they play a crucial role in learning and memory. Genes are specific DNA sequences that carry instructions for when, where and how much a certain protein a cell should make. Synapse-like interactions “Sponges are the first animals to branch off compared to the rest of animals. They don’t have nervous systems, yet we found they have many of the genes that are used in the synapse of modern humans,” said Todd Oakley, an evolutionary biologist at the University of California, Santa Barbara (UCSB), who was involved in the study. Even more surprising, the proteins made by the sponge genes were found to interact with one another in ways similar to proteins in human synapses. “Not only do they have [human synapse genes], they also have this signature that they may be functioning in a similar way in the absence of a nervous system, as they do in the presence of one,” Oakley told LiveScience. The function of the sponge genes are not clear, but their human counterparts combine to form complex protein “machines” important for synaptic communication, Oakley said. The team’s research was made possible by the recent sequencing of the sponge genome, the result of which have yet to be published but is available online. In addition to lacking nervous systems, sponges also don’t have internal organs or muscles. Sponges are filter-feeders: They spend most of their lives anchored to sediment or rock. Feeding and the excreting wastes are done with the aid of flowing water. May I borrow that gene? Scientists think the first neurons and synapses first appeared on Earth more than 600 million years ago in organisms called “cnidarians,” which include the hydra, sea anemone and jellyfish. “While sponges do show evidence that their cells can communicate with each other, the nervous system is much more efficient,” Oakley said. The researchers speculate that the sponge genes were recycled over evolutionary time, with small modifications, to create the nervous systems of later animals. “Evolution can take these ‘off-the-shelf’ components and put them together in new and interesting ways,” said study leader Kenneth Kosik, a UCSB neuroscientist. Other genes would also have had to evolve or to have been co-opted to create complex nervous systems, such as our own. Scientists think an estimated 77 to 1,000 genes are important for human synaptic communication, Oakley said.