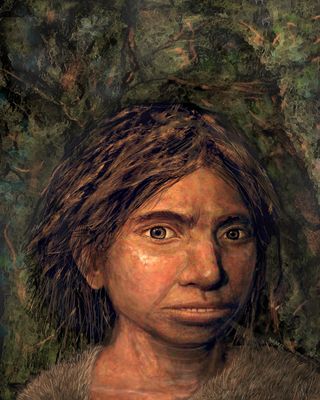 An artist's rendering show's the first-ever portrait of a Denisovan woman, recreated from an ancient DNA sample.
(Image: © Maayan Harel)

As recently as 15,000 years ago, humans shared their caves with another group of upright apes called the Denisovans. The two hominins were genetically distinct, splitting from their nearest common ancestor more than 500,000 years earlier, but they were physically close. Humans and Denisovans mated — probably a lot — over a range that spanned from Siberia to Southeast Asia, leaving a scant genetic lineage that's still detectable in some human populations today.

Besides those genetic scraps, only a few reminders of our ancient familiars remain — a jawbone, some teeth and a girl's pinky bone with a dollop of DNA on its tip, plucked from a cave in Siberia in 2010. No complete skeletons or skulls have ever been found, leaving scientists to wonder: What did these proto-people even look like?

A new study published today (Sept. 18) in the journal Cell aims to answer that question with an unprecedented genetic analysis. By making a methyl map of the Denisovan's genome — that is, a map showing how chemical changes to gene expression could influence physical traits — an international team of researchers has reconstructed the first plausible portrait of the 40,000-year-old Denisovan girl whose pinky helped launch a new branch of the human family tree.

The results show a figure with a low forehead, protruding jaw and near-nonexistent chin — an overall anatomy not so different from another group of extinct humans, the Neanderthals, who occupied the Earth at around the same time.

"I was expecting Denisovan traits to be similar to Neanderthals, just because Neanderthals are their closest relatives," lead study author David Gokhman, a geneticist at Stanford University, told Live Science. "But in the few traits where they differ, the differences are extreme."

For example, Gokhman and his colleagues found, Denisovans had significantly longer dental arches (that is, their top and bottom rows of teeth jutted out farther) than Neanderthals and modern humans; and the tops of their skulls stretched noticeably wider. These findings give Gokhman some hope that two partial skulls recently discovered in China might actually belong to the wide-headed Denisovans, potentially expanding the meager fossil record of our elusive, dead relatives.

So, how do you reconstruct an extinct person's face when all you have to work with is some DNA on their fingertip? For this study, Gokhman and his colleagues looked for abnormalities in gene expression — or, how certain physical traits may be influenced by chemical inhibitors in a person's genetic code.

"There are various layers that compose our genome," Gokhman said. "We have the DNA sequence itself, where our genes are encoded. Then, on top of that, there are regulatory layers that control which genes are activated or deactivated, and in what tissue."

One of those layers is a process called DNA methylation. Methylation occurs when chemicals containing one carbon atom and three hydrogen atoms — also known as methyl groups — bind to certain DNA molecules. While this binding doesn't change the underlying DNA sequence, it can interfere with the way that specific genes are expressed. Certain patterns of methylation can indicate whether a cell has cancer, for example, and can lead to anatomical deformities.

So, the researchers looked at the available Denisovan DNA to compare the group's methylation patterns with those found in humans and Neanderthals to see where their gene expression overlapped, and where it diverged. Once the Denisovans' unique methylation profile was mapped, the researchers tried to figure out which physical traits were being altered by each methylated gene, based on known human disorders that result when those same genes are inhibited.

The team found a total of 56 traits in Denisovans that they predicted to be different from modern humans and Neanderthals, 32 of which resulted in clear anatomical differences. In addition to their wide skulls and jutting jaws, Denisovans had wider pelvises and rib cages than modern humans, and thinner, flatter faces than Neanderthals.

To test the accuracy of their anatomical predictions, the researchers also created similar methyl maps for Neanderthals and chimpanzees — two species with known anatomy — that they could use to check their predictions instantly. They found that about 85% of their predictions about which traits diverged and in what direction (say, whether a Neanderthal's skull was wider or thinner than a human's) were dead-on.

"The only true test of our predictions is to find more Denisovan bones and match them," Gokhman said. His dream fossil, he added, would include part of a Denisovan face — "just faces are so divergent between different humans," he said.