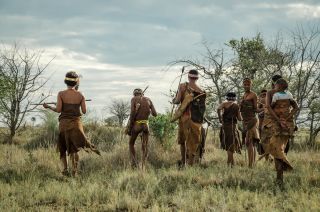 Two hundred thousand years ago, the earliest shared ancestors of every living human on Earth rested their feet at a verdant oasis in the middle of Africa's Kalahari Desert.

Here, in a patchwork of now-extinct lakes, forests and grasslands known as the Makgadikgadi paleowetland, our greatest grandmothers and -grandfathers hunted, gathered and raised families for tens of thousands of years. Eventually, as Earth's climate changed, shifts in rainfall opened up fertile new paths through the desert. For the first time, our distant relatives had the chance to explore the unknown, putting behind them what a team of researchers now calls "the ancestral homeland of all humans alive today."

That's the story, anyway, told by a new paper published today (Oct. 18) in the journal Nature.

By studying the genomes of more than 1,200 indigenous Africans living in the southern part of the continent today, the team pieced together a history of one of the oldest DNA lineages on Earth: a collection of genes called L0, which is passed down maternally through mitochondria and has survived remarkably unchanged in some populations for hundreds of thousands of years. By tracking where and when the L0 lineage first split into the slightly different sublineages still seen in some indigenous African populations today, the researchers believe they have pinpointed precisely where the first carriers of L0 lived and thrived for thousands of years.

"We've known for a long time that humans originated in Africa and roughly 200,000 years ago," study author Vanessa Hayes, a geneticist at the Garvan Institute of Medical Research and University of Sydney, both in Australia, said in a news conference. "But what we hadn't known until this study was where, exactly this homeland was."

That "exactly" has some other researchers skeptical. Chris Stringer, a human origins expert at the Natural History Museum in London, told Live Science he is "cautious" about using modern genetic distributions to infer where ancient populations lived 150,000 years ago — particularly in a continent as large as Africa. (Similar studies have traced the earliest human populations to various parts of eastern, western and southern Africa.)

Furthermore, he added, because the present study follows only one sequence of maternally inherited genetic code, its findings may not capture the full picture of humankind's earliest travels through Africa. Rather, the best available evidence suggests that multiple genetically-different founder populations may have lived throughout various parts of the continent, giving modern humans not one but several homelands.

"Like so many studies that concentrate on one small bit of the genome, or one region, or one stone tool industry, or one 'critical' fossil, it can't capture the full complexity of our mosaic origins," Stringer said.

The L0 lineage is a sequence of DNA encoded solely in mitochondria, a small structure in your cells that turns food into cellular energy.

L0 is especially important in that regard, as all living people are believed to descend on their maternal line from the woman who first carried the sequence, a hypothetical woman called "mitochondrial Eve." Today, the L0 lineage is found most commonly in the Khoisan people, two indigenous groups living in southern Africa. Numerous other groups of indigenous Africans carry mitochondrial DNA that descends from this lineage, but with subtle variations. By comparing those variations from group to group, geneticists can piece together a general timeline of when these ancient genetic lineages diverged.

In the new study, the researchers sequenced about 200 L0 mitogenomes in indigenous people living around southern Africa. When compared to a database of more than 1,000 existing L0 sequences, the dataset created one of the most comprehensive snapshots ever taken of how the ancient lineage and its closest offshoots are dispersed around southern Africa today. This distribution data allowed the team to estimate where and when mitochondrial Eve's descendants first split into separate, genetically distinct groups.

"Using that, we could pinpoint what we believe is our human homeland," Hayes said.

This homeland, the researchers suggested, is Makgadikgadi, a vast wetland some 46,000 square miles (120,000 square kilometers) in area, or roughly twice the area of Lake Victoria, Africa's largest lake today. The team found that mitochondrial Eve and her descendants lived in this region for about 30,000 years (from 200,000 to 170,000 years ago) before the L0 lineage split into its first subgroup.

"This tells us that these early humans must have stayed within the homeland region and not left" during that time, Hayes said.

So, why did our ancient ancestors finally leave their homeland, altering their genetic destinies in the process? According to the study authors, it may have been a matter of climate change.

Using climate models and sediment-core samples from the area, the team found that, from roughly 130,000 to 110,000 years ago, changing rainfall patterns opened up several "green corridors" of habitable land in the desert around Makgadikgadi. Corridors to the northwest and southeast of the wetland could have drawn migrants in those directions, leading them toward the areas where different indigenous groups still live today, the researchers wrote. This movement could adequately explain the distribution of L0 subgroups around southern Africa.

What it does not explain, however, is the other half of our genetic lineage (the male half). According to Stringer, there's not a lot of evidence that our earliest male ancestors walked a path like the one described here.

"Looking at the male-inherited Y chromosome, the most-divergent lineages currently known in extant humans are found in west Africa, not south Africa, suggesting our Y-chromosome ancestors may have originated from there," Stringer said.

The authors of the study do acknowledge that modern humans may have had multiple "homelands" where different genetic lineages took root; L0 is simply the best-preserved lineage, thanks to its strictly maternal provenance. So, while researchers may now be closer to pinpointing the little Eden where mitochondrial Eve started her family, it's still too early to say we've all found our homeland.