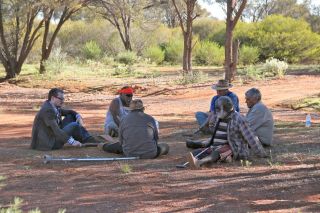 Researchers have found that Aboriginal Australians are some of the oldest living populations on Earth. Here, Eske Willerslev talks to Aboriginal elders n the Kalgoorlie area in southwestern Australia in 2012.
(Image: © Preben Hjort, Mayday Film.)

A group of humans migrating out of Africa some 40,000 to 70,000 years ago mingled with an as-yet unknown branch of humanity, researchers say.

Modern humans originated about 150,000 to 200,000 years ago in Africa. However, scientists have long debated when and how the modern human lineage spread out of Africa to nearly every corner of the globe. Nearly everyone outside Africa descended from an exodus that occurred between 40,000 and 70,000 years ago, but recent archaeological findings and climate models suggest that migrations of modern humans from Africa began at least 100,000 years ago.

One way to find out whether, in the past, modern humans dispersed from Africa in one wave or many — and to see if they intermingled with any other human lineages along the way — is to examine the genomes of present-day modern humans. [See Photos of Our Closest Human Ancestor]

"We're interested in understanding how our species has come to be how it is through the lens of ancient DNA," said Swapan Mallick, bioinformatics director at Harvard Medical School in Boston and lead author of one of the three studies appearing in the Sept. 22 issue of the journal Nature.

Previous human genetic databases often sampled a relatively narrow range of populations, which could skew results or miss key details about the migrations of modern humans out of Africa. Now, three studies have collected new, high-quality data from 787 human genomes from more than 280 geographically diverse populations around the world, including typically understudied and rapidly disappearing groups.

Among the understudied groups researchers looked at are African populations, which have considerable genetic, linguistic and cultural diversity. They also examined genomes from Australia, where previous research uncovered some of the earliest archaeological and fossil evidence of modern humans outside Africa.

The genetic analyses revealed the genomes of present-day aboriginal Australians might harbor evidence of ancient interbreeding with an unknown human lineage.

"Who these people are, we don't know," said Eske Willerslev at the University of Copenhagen in Denmark, and senior author of one of the three studies.

Previous research unearthed bones from a mysterious extinct branch of the human family tree from Denisova cave in Siberia's Altai Mountains. Analysis of DNA extracted from the fossils suggested these "Denisovans" shared a common origin with Neanderthals, but were nearly as genetically distinct from Neanderthals as Neanderthals were from living people. [Denisovan Gallery: Tracing the Genetics of Human Ancestors]

Recent work suggested that Denisovans have contributed about 5 percent of their DNA to the genomes of present-day people of the Pacific islands of Oceania. However, these new findings suggest that what seemed to be evidence of Denisovans in the Pacific were actually signs of an unknown human lineage.

The new findings also shed light on the controversy over whether modern humans dispersed from Africa in a single exodus or in multiple distinct waves at different times. When it came to people from Papua New Guinea, "we could discover, in the genomes of the Papuan individuals analyzed here, small traces of an additional, early expansion out of Africa that was previously hypothesized only from archaeological remains," Mait Metspalu, an evolutionary geneticist at the Estonian Biocenter in Tartu, Estonia, and senior author of one of the three studies, told Live Science.

The researchers suggest that at least 2 percent of the Papuan genome harbors traces of an early migration that happened about 120,000 years ago. Previous research suggested that non-Africans largely descend from an exodus that happened between 40,000 and 70,000 years ago.

"Our results, while for the most part confirming the already accepted model of a single expansion out of Africa as the source event of all non-African populations, show that additional expansions were not as unlikely as we thought," Luca Pagani, a molecular anthropologist at the Estonian Biocenter and lead author of one of the three studies, told Live Science.

The scientists also discovered that aboriginal Australians "are one of the oldest living populations on Earth, and have been in the same area for the past 50,000 to 60,000 years," Willerslev said.

"I can't think of any other place in the world where humans have been so long in the same spot as Australia," Willerslev said. "Yes, there are populations in Africa that are older, but we have no idea if they stayed in the same area in Africa for as long a time."

The researchers noted that about 90 percent of aboriginal Australians speak languages belonging to a single linguistic family, "but some people in northwest Australia speak other language families," Willerslev said. "It'd be very interesting to see what the story is there when it comes to how they migrated to Australia."