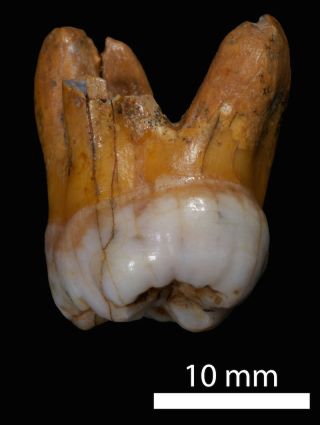 A molar from a Denisovan individual, found in a cave in Siberia.
(Image: © Image courtesy of Bence Viola.)

A mysterious extinct branch of the human family tree that once interbred with modern humans was more genetically diverse than Neanderthals, a finding that also suggests many of these early humans called Denisovans existed in what is now southern Siberia, researchers say.

In 2008, scientists unearthed a finger bone and teeth in Denisova cave in Siberia's Altai Mountains that belonged to lost relatives now known as the Denisovans (dee-NEE-soh-vens). Analysis of DNA extracted from a finger bone from a young Denisovan girl suggested they shared a common origin with Neanderthals, but were nearly as genetically distinct from Neanderthals as Neanderthals were from living people.

A deeper understanding of extinct human lineages could shed light on modern human evolution. For instance, analysis of the Denisovan genome showed that Denisovans have contributed on the order of 5 percent of their DNA to the genomes of present-day people in Oceania, and about 0.2 percent to the genomes of Native Americans and mainland Asians. These DNA contributions not only signify interbreeding between the two groups (scientists have yet to definitively call Denisovans a separate species), but also may explain the origin of some traits of living humans. [See Photos of Denisovan Fossils and Siberian Cave]

"In Tibet, an adaptation to live at high altitudes where there is little oxygen in the air has been shown to come from Denisovans," said study co-author Svante Pääbo, an evolutionary geneticist at the Max Planck Institute for Evolutionary Anthropology in Leipzig, Germany.

Now scientists have analyzed two molars found in Denisova cave. Compared with the teeth of Neanderthals and modern humans, those Denisova teeth are very large and lack traits such as certain raised points on the crowns of molars, supporting the suggestion that Denisovans were distinct from both groups.

"This is the first time we can look at genetic variation among Denisovan individuals," Pääbo told Live Science.

In addition, the genetic analysis revealed that DNA from one molar accumulated fewer mutations than the other tooth or the finger bone. This suggested that molar was on the order of 60,000 years older than the other two specimens, a difference that suggests "that the Denisovans were present in the Altai Mountains in southern Siberia over a very long time, or at least that they were there periodically over a long time," Pääbo said.

The scientists detailed their findings online Nov. 16 in the journal Proceedings of the National Academy of Sciences.