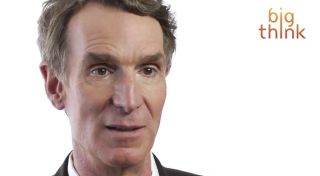 Bill Nye speaks out against creationism in a new video from Big Think.
(Image: © Big Think)

Science educator and former TV host Bill Nye has struck out against creationism in a new video, calling the worldview "untenable" and "inconsistent."

In a video posted on YouTube by Big Think, Nye said that rejection of evolution "holds everybody back," and urged adults to support the teaching of evolution in schools. Anti-evolution education bills are a perennial issue in state legislatures around the country.

"I say to the grownups, if you want to deny evolution and live in your world, your world that's completely inconsistent with everything we observe in the universe, that's fine, but don't make your kids do it, because we need them," Nye said. "We need scientifically literate voters and taxpayers for the future."

Anti-evolution beliefs generally come in two flavors: creationism, which holds to a literal Biblical translation of the origin of life, and intelligent design, which can be more flexible about the timeline and methods but holds that a deity must have been involved in the creation of life. [7 Theories on the Origin of Life]

Nye, who is most famous for hosting the children's show "Bill Nye the Science Guy" in the 1990s, did not mention any specific anti-evolution efforts by name, but according to the National Center for Science Education (NCSE), a nonprofit dedicated to promoting evidence-based science information in schools, multiple states are currently considering legislation that would limit the teaching of evolution.

In Missouri, for example, a new amendment to the state constitution states that no student should be compelled to participate in educational activities that violate his or her religious beliefs, a rule that education advocates fear could mean that children could skip vast swathes of important information in science class.

In Kentucky, GOP lawmakers have questioned state testing that includes questions on evolution, according to an Aug. 14 story in the Lexington Herald-Leader. Kentucky is the only state with a statute on the books allowing for teachers to teach Biblical creation theories, though a 2006 investigation by the Louisville Courier-Journal found no evidence that any schools were actually doing so, according to the NCSE.

Other laws try to work around the teaching of evolution without mentioning the controversy outright. This April, Tennessee instituted a new law requiring state and local education authorities to help teachers "find effective ways to present the science curriculum as it addresses scientific controversies." The bill mentions evaluating the "scientific strengths and scientific weaknesses of existing scientific theories," including such hot-button topics as evolution, global warming and human cloning.

In his new video, Nye argues that without an understanding of the timeline of evolution, the world becomes "a mystery instead of an exciting place."

"I mean, here are these ancient dinosaur bones or fossils, here is radioactivity, here are distant stars that are just like our star, but they're at a different point in their lifecycle," Nye said. "The idea of deep time, of this billions of years, explains so much of the world around us. If you try to ignore that, your world view just becomes crazy, just untenable, itself inconsistent."