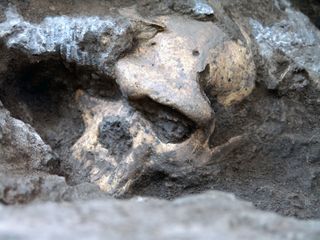 A 1.8-million-year-old skull that was discovered in Dmanisi, Georgia. In a study published in October 2013 in the journal Science, researchers suggested modern humans may have dispersed out of Africa in more than one wave of migration.
(Image: © Photo courtesy of Georgian National Museum)

Ancient stone artifacts recently excavated from Saudi Arabia possess similarities to items of about the same age in Africa — a discovery that could provide clues to how humans dispersed out of Africa, researchers say.

Modern humans originated about 200,000 years ago in Africa. However, scientists have long debated when and how the modern human lineage spread out of Africa.

"Understanding how we originated and colonized the world remains one of the most fascinating and enduring questions, because it is our story as humans," said lead study author Eleanor Scerri, an archaeologist at the University of Bordeaux in France.

Previous research had suggested that the exodus from Africa started between 70,000 and 40,000 years ago. However, a genetic analysis reported in April hinted that modern humans might have begun their march across the globe as early as 130,000 years ago, and continued their expansion out of Africa in multiple waves.

In addition, stone artifacts recently unearthed in the Arabian Desert date to at least 100,000 years ago. This could be evidence of an early modern-human exodus out of Africa, scientists say. However, it's possible that these artifacts weren't created by modern humans; a number of now-extinct human lineages existed outside Africa before or at the same time when modern humans migrated there. For instance, the Neanderthals, the closest known extinct relatives of modern humans, lived in both Europe and Asia around that time. [See Images of Our Closest Human Ancestor]

To help shed light on the role the Arabian Peninsula might have played in the history of modern humans, scientists compared stone artifacts recently excavated from three sites in the Jubbah lake basin in northern Saudi Arabia with items from northeast Africa excavated in the 1960s. Both sets of artifacts were 70,000 to 125,000 years old. Back then, the areas that are now the Arabian and Sahara deserts were far more hospitable places to live than they are now, which could have made it easier for modern humans and related lineages to migrate out of Africa.

"Far from being a desert, the Arabian Peninsula between 130,000 and 75,000 years ago was a patchwork of grasslands and savanna environments, featuring extensive river networks running through the interior," Scerri said.

The northeast African stone tools the researchers analyzed were similar to ones previously found near modern-human skeletons. The scientists found that stone artifacts at two of the three Arabian sites were "extremely similar" to the northeast African stone tools, Scerri told Live Science. At the very least, Scerri said, this finding suggests that there was some level of interaction between the groups in Africa and those in the Arabian Peninsula, and might hint that these Arabian tools were made by modern humans.

Surprisingly, Scerri said, tools from the third Arabian site the researchers analyzed were "completely different." "This shows that there was a number of different tool-making traditions in northern Arabia during this time, often in very close proximity to each other," she said.

One possible explanation for these differences is that the artifacts were made by different human lineages. Future research needs to uncover skeletal remains with ancient tools unearthed from the Arabian Peninsula to help solve this mystery, Scerri noted. Unless skeletal remains are found near such artifacts, it will remain uncertain whether modern humans or a different  human lineage might have made them.

"It seems likely that there were multiple dispersals into the Arabian Peninsula from Africa, some possibly very early in the history of Homo sapiens," Scerri said. "It also seems likely that there may have been multiple dispersals into this region from other parts of Eurasia. These features are what make the Arabian Peninsula so interesting."

Ancient migrants out of Africa and from Eurasia might have encountered a number of different populations in the Arabian Peninsula, Scerri said. Some of these groups may have adapted to their environment more than others had, which raises the intriguing question: "Did the exchange of genes and knowledge between such groups contribute to our ultimate success as a species?" Scerri said.

The scientists detailed their findings online Aug. 8 in the Journal of Human Evolution.