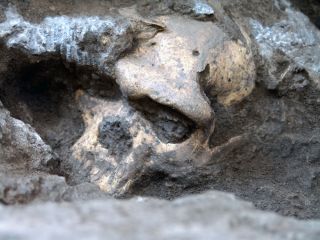 The 1.8-million-year-old skull unearthed in Dmanisi, Georgia, suggests the earliest members of the Homo genus belonged to the same species, say scientists in a paper published Oct. 18, 2013 in the journal Science.
(Image: © Photo courtesy of Georgian National Museum)

Modern humans may have dispersed in more than one wave of migration out of Africa, and they may have done so earlier than scientists had long thought, researchers now say.

Modern humans first arose between 100,000 and 200,000 years ago in Africa. But when and how the modern human lineage then dispersed out of Africa has long been controversial.

Scientists have suggested the exodus from Africa started between 40,000 and 70,000 years ago. However, stone artifacts dating to at least 100,000 years ago that were recently uncovered in the Arabian Desert suggested that modern humans might have begun their march across the globe earlier than once suspected.

Out of Africa models

The investigators used these models to predict how much the genes and skull measurements of different groups in Africa, Asia and Australia might have diverged from one another given how separated they were by space and time. Then, the researchers compared these predictions with actual gene and skull data from 10 African, Asian and Australian human populations.

The researchers found that both the genetic and skull data supported a multiple-dispersal model involving several migrations.

The first wave of migrations probably followed the southern coast of the Arabian Peninsula as early as 130,000 years ago to Australia and the west Pacific region, while the second wave traveled along the northern route about 50,000 years ago, the researchers said. These waves of migration appear relatively isolated from each other.

"Australian Aborigines, Papuans and Melanesians were relatively isolated after the early dispersal along the southern route," study lead author Hugo Reyes-Centeno, of the University of Tübingen, said in a statement. Other Asian populations apparently descended from members of the later northern wave of migration, the researchers said.

The delay between these waves of migration could be due to ancient environmental factors, "specifically climatic conditions that might have impeded the crossing of the Arabian Peninsula, such as desert conditions," Harvati said.

Ancient environmental factors might not only have prevented migrations, but also spurred them, Havarti said.

The researchers cautioned that interbreeding between modern humans and other lineages of humans might influence the results of this new study. For example, instances of interbreeding with the now-extinct Denisovan lineage might have introduced ancient genes into certain modern human groups, perhaps making them look as if they left Africa earlier than they actually did. [Denisovan Gallery: Tracing the Genetics of Human Ancestors]

"Our study did not specifically test for hybridization with archaic humans, and, of course, it is possible that such admixture could contribute to our results," Harvati said. "We feel, however, that the very low levels of admixture that have been proposed are not sufficient to drive our findings."

The researchers said continued fieldwork and genetic advancements might help confirm this model of multiple, relatively isolated waves of migration.

"The story of human evolution tends to be simplified," Harvati said. "However, more complex models, such as multiple dispersals versus a single dispersal out of Africa, gain strength as more data and new methods become available."

"Further fieldwork in the region of the southern route — for example, the Arabian Peninsula, southeast Asia, Melanesia — is essential in order to further understand the timing and route of early modern human dispersals," Harvati said. "Of course, this is a vast geographical space that has been largely understudied, but it is crucial in developing our knowledge of the first Eurasians."

The scientists detailed their findings online April 21 in the journal Proceedings of the National Academy of Sciences.