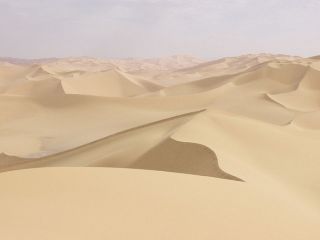 Nowadays, this portion of Libya is part of the great Sahara desert
(Image: © ruba_ch | Flickr.com)

Some 100,000 years ago, three large rivers snaked through what is today the bone-dry Sahara Desert, new research suggests.

The rivers, now buried, would have created pockets of green areas and provided water in a parched landscape. That, in turn, could have allowed ancient humans to migrate from across the Sahara and then out of Africa, according to research detailed today (Sept. 11) in the journal PLOS ONE.

"These rivers were big," said study co-author Thomas Coulthard, a hydrologist at the University of Hull in England. "They were about the same as the Missouri or the Rhine or even the Nile when it's low flow." [Sahara to Patagonia: The 10 Biggest Deserts On Earth]

Some scientists think humans left central Africa between 125,000 and 100,000 years ago. (A recent study suggested the migration happened as early as 62,000 years ago.) Humans may have first migrated to the west coast of Africa before traveling along the coastline to the Middle East, or they may have moved along the Nile or around the Arabian Peninsula. Those routes would have required thousands of miles of travel.

Traveling through the Sahara Desert would have been a more direct route for people in Central Africa. But the Sahara Desert today is one of the driest places on Earth, with half of the Sahara receiving less than an inch of rainfall a year, making any trek arduous.

But archaeological remains suggest the Sahara was once settled, and some scientists thought a few small rivers threading through the desert might have once been large and continuous.

To test out that idea, Coulthard and his colleagues created a computer model of the magnitude of monsoons in a region of the Sahara spanning 4.6 million square miles (12 million square kilometers) as it existed about 100,000 years ago. At that time, the monsoon rains landed hundreds of miles north from where they fall now.

As a result, heavy rains fell on the north face of two Saharan mountain ranges, the Ahaggar and Tibesti mountains, which span portions of Algeria, Libya and Chad.

The model used topography to predict where the water would have flowed.

Even with high water loss due to evaporation and groundwater absorption, the researchers found that higher rainfall fed three small, mostly dry rivers — the Irharhar, Sahabi and Kufra — that were much larger than today and spanned the length of the Sahara. [The World's 10 Longest Rivers]

"It isn't a huge amount, but it's the amount of rainfall you might get in southern Spain," Coulthard told LiveScience.

These rivers would have provided green habitats to support people migrating from Africa, Coulthard said.

In fact, archaeologists have found stone tools dating to that time around the Irharhar River, Coulthard said. And archaeological finds may be hidden near the other two rivers.

"The area is covered in sand dunes and sand sea, so there's a whole raft of archaeological evidence that's just kind of buried there," Coulthard said. (Sand sea is a flat area of sand with no vegetation and really no physical features.)

The findings are reasonable and convincing, Paul Myers, an earth scientist at the University of Alberta in Canada, who was not involved in the study, wrote in an email.

"We know that orbital changes effect the monsoon and precipitation in this region. It has also been shown before that in other periods the Sahara has been quite wet," Myers said, referring to the slight changes to Earth's orbit over time.

But a Saharan route out of Africa is still unlikely, said Chris Stringer, an anthropologist at the Natural History Museum in London, who was not involved in the study.

"Even these river systems are some way from the route through the narrow area east of the Nile, which is going to lead them into Israel," Stringer told LiveScience.

After making it through the Sahara, migrating people still would have needed green areas to migrate east out of Africa, he said.

Instead, the findings could help explain how technological advances, such as the prevalence of red ochre paint, spread within Africa at the time, Stringer said.