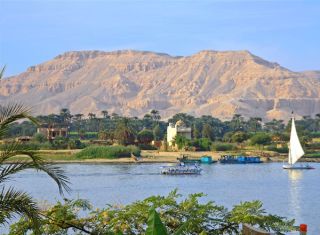 The Nile River flows northward through the tropical climate of eastern Africa and into the Mediterranean Sea.
(Image: © SXC.hu)

What's the world's longest river? That depends on how your measure them.

Measuring a river is not as simple as it seems because many rivers join together in river systems, so it is sometimes difficult to pinpoint where one individual river begins. The generally accepted method among scientists is to measure the length of the longest continuous river channel in a given river system.

Although the accepted way of measuring a river's size is by its length, the magnitude of a river can also be measured by its volume, and therefore crowning the largest river in the world can be a thorny issue.

Flowing northward through the tropical climate of eastern Africa and into the Mediterranean Sea, the Nile river is the longest river in the world at 4,135 miles (6,650 kilometers), according to the U.S. National Park Service.

The Nile runs through Egypt, as well as nine other African nations Sudan, Eritrea, Ethiopia, Uganda, Kenya, Tanzania, Rwanda, Burundi and the Democratic Republic of Congo. More than 300 million people depend on the Nile for their water supply and the irrigation of seasonal crops, according to the Council of Ministers of Water Affairs of the Nile Basin.

The Nile's energy is harnessed by the Aswan High Dam, which was completed in 1970 and provides hydroelectricity and controls summer flooding. During the 1980s, the dam provided half of Egypt's electricity, although that amount has decreased over the years and it currently contributes 20 percent of total energy generated in Egypt, according to NASA's Earth Observatory.

The Amazon River is 3,980 miles (6,400 kilometers) long, according to the U.S. National Park Service. It is, however, the world's largest river by volume and contains 20 percent of the Earth's fresh water, according to the National Science Foundation.

Parts of the river exceed 120 miles (190 kilometers) in width during the wet season, and to date, no bridge spans the Amazon, according to the Amazon Center for Environmental Education and Research (ACEER).

From where it starts in Peru, the Amazon River flows through Brazil and empties out into the Atlantic Ocean. The river also boasts the largest river drainage basin on the planet, which includes portions of Brazil, Bolivia, Peru, Ecuador and Colombia.

Located at the basin is the extraordinary Amazon rainforest, home to a wide variety of birds, mammals and other wildlife, including 4,000 species of butterflies.

In 2007, Brazilian scientists declared that they had re-measured the Amazon during a 14-day expedition, and calculated that the river's length to be 4,225 miles (6,800 kilometers), therefore making it longer than the Nile, according to their results.

The unpublished study, conducted by the Brazilian Institute of Geography and Statistics, was challenged by scientists skeptical about what methods the Brazilian researchers used to measure the Amazon River.

"Personally, I would want to know a little bit more about how they came to that number before I was comfortable saying, 'Yes this is longer,'" Andrew Johnston, a geographer at the Smithsonian's National Air and Space Museum in Washington, D.C., told the press.

Overall, the current consensus within the geographic community is that the Nile remains the holder of the longest river title, with the Amazon coming in a close second place, according to the United Nations Educational, Scientific and Cultural Organization (UNESCO).