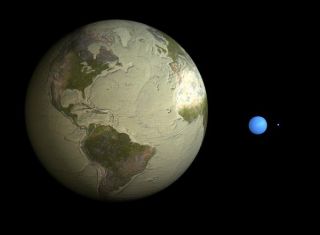 The Earth stripped of its water (left). All of the Earth's ocean water (middle) and freshwater (right).
(Image: © David Gallo/WHOI.)

If Earth was the size of a basketball, all of its water would fit into a ping pong ball.

How much water is that? It's roughly 326 million cubic miles (1.332 billion cubic kilometers), according to a recent study from the U.S. Geological Survey. Some 72 percent of Earth is covered in water, but 97 percent of that is salty ocean water and not suitable for drinking.

"There's not a lot of water on Earth at all," said David Gallo, an oceanographer at the Woods Hole Oceanographic Institution (WHOI) in Massachusetts.

This seems, and looks, like a lot of water, Gallo told Life's Little Mysteries, but looks can be deceiving.

If the Earth was an apple, Gallo said, the water layer would be thinner than the fruit's skin. The Earth's freshwater is even rarer.

"For humanity to thrive, or even exist, we need to sprinkle that teeny bit of fresh water in the right places, at the right times and in just the right amounts," Gallo said.

Here's how Earth's freshwater is spread around the globe:

There is much more freshwater stored in the ground than there is in liquid form on the surface, according to the USGS.

This article was provided by Life's Little Mysteries, a sister site to OurAmazingPlanet.