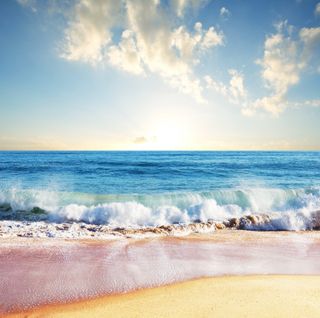 Oceans are salty due to deposits made by rivers.
(Image: © Beach image via Galyna Andrushko | Shutterstock)

Oceans make up about 70 percent of Earth’s surface. But why is the ocean salty?

Ocean water contains lots of different mineral salts: sodium, chloride, sulfate, magnesium, calcium, potassium, bicarbonate and bromide. These salts enter the ocean through rivers, which pass over rocks and soil, picking up salt along the way.

This salt builds up in the ocean because the only way water can leave the ocean is through evaporation. And when the water evaporates it doesn't take the salt with it. So you end up with less water, and the same amount of salt, resulting in a pretty salty sea.

The same thing can happen to a smaller, landlocked body of water, such as the Great Salt Lake in Utah, where water evaporates quickly in the desert climate — the lake has dropped 20 feet since 1849. A favorite pastime for visitors is to float on the lake like a cork, because the high salinity makes people more buoyant.

Ocean salinity levels can vary dramatically from place to place. For example, the Mediterranean Sea is more salty than oceans off the coast of continents that have large freshwater rivers, such as the Amazon. The Atlantic Ocean near the mouth of the Amazon River has relatively low salinity due to the mixing of fresh river water with salty ocean water.