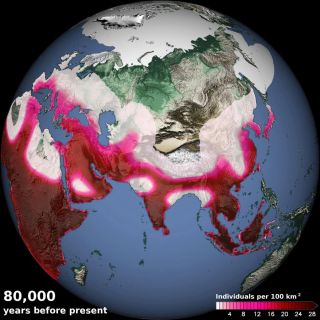 A computer model simulated human density 80,000 years ago, showing the arrival of humans in eastern China and southern Europe as well as migrations out of Africa along vegetated paths in Sinai and the Arabian Peninsula.
(Image: © Tobias Friedrich)

Ancient human migrations out of Africa may have been driven by wobbles in Earth's orbit and tilt that led to dramatic swings in climate, a new study finds.

Modern humans first appeared in Africa about 150,000 to 200,000 years ago. It remains a mystery as to why it then took many millennia for people to disperse across the globe. Recent archaeological and genetic findings suggest that migrations of modern humans out of Africa began at least 100,000 years ago, but most humans outside of Africa most likely descended from groups who left the continent more recently — between 40,000 and 70,000 years ago.

Previous research suggested that shifts in climate might help explain why modern human migrations out of Africa happened when they did. For instance, about every 21,000 years, Earth experiences slight changes to its orbit and tilt. These series of wobbles, known as Milankovitch cycles, alter how much sunlight hits different parts of the planet, which in turn influences rainfall levels and the number of people any given region can support. [See Photos of Our Closest Human Ancestor]

Now scientists have developed a new computer simulation of Earth to pinpoint how these changes in orbit and solar radiation levels might have affected rainfall, temperature, sea levels, glacial ice, vegetation, carbon dioxide levels and global modern human migration patterns over the past 125,000 years. The researchers noted that this model's predictions agree well with previous findings regarding ancient climates.

The model suggests that modern humans dispersed from Africa in multiple waves across the Arabian Peninsula and the area known as the Levant, the eastern Mediterranean region that includes Israel and Syria. These results closely align with previous estimates garnered from archaeological and fossil data of when modern humans arrived in areas such as the Middle East, Europe, Asia, Australia and the Americas.

"Earth's wobble with a periodicity of 21,000 years played a huge role in our dispersal across the planet and most likely also in our evolution and adaptation," said study lead author Axel Timmermann, a climate researcher at the University of Hawaii at Manoa. "If the climate had been constant over the past 125,000 years, we would have evolved in a very different way."

Specifically, the researchers found that intensified rainfall in northern Africa, the Arabian Peninsula and the Levant would have generated habitable green corridors for modern humans to migrate through the Sahara and Arabian deserts. These corridors would have been open during four distinct times — about 106,000 to 94,000 years ago; 89,000 to 73,000 years ago; 59,000 to 47,000 years ago; and 45,000 to 29,000 years ago — "enabling Homo sapiens to leave northeastern Africa and embark onto their grand journey into Eurasia, Australia and the Americas," Timmermann told Live Science.

The model suggests these migrations were not one-way in nature away from Africa, "as is often portrayed in schematics," Timmermann said. "A green migration corridor between Africa and the eastern Mediterranean meant that Africans were migrating into Eurasia, and Eurasians were moving into Africa. The backflow of Homo sapiens into certain regions and the corresponding backflow of genes may be crucial for understanding who we are, why we are, where we are."

In the future, "I am planning to include Neanderthals in our computer model" and account for factors such as interbreeding, cultural exchange and competition over food, Timmermann said.

Timmermann and his colleague Tobias Friedrich at the University of Hawaii at Manoa detailed their findings in the Sept. 22 issue of the journal Nature.