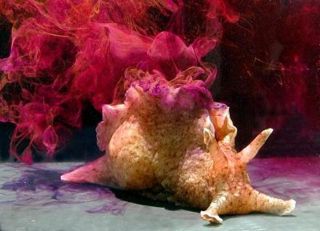 The common sea slug, also known as the sea hare, can grow up to 16 pounds. It releases its ink to confuse predators so it can make a hasty getaway. Photo
(Image: © Genny Anderson)

Beneath a slimy fa?ade, the sea slug is somewhat of a brainiac.

At any given time within a single brain cell of this marine snail (Aplysia), more than 10,000 genes are hard at work, suggests a new study looking at aspects of the sea slug's genome.

By probing the brain of Aplysia, researchers identified more than 100 genes similar to those associated with all major human neurological diseases and more than 600 genes controlling brain development.

The findings suggest that acts of learning or the progression of brain disorders do not take place in isolation, and instead stem from interactions between large clusters of genes within many cells.

Any insights into how the brain runs and the genes that orchestrate the brain activity are welcomed by neuroscientists. Until now, for instance, scientists have been largely in the dark about how genes shape circuits in the brain to enhance learning and memory.

"This improves the genetic data that is available on Aplysia by several orders of magnitude," said study team member Eric Kandel of Columbia University in New York.

The marine slug has a relatively simple nervous system, with about 10,000 large neurons that can be easily identified, compared with about 100 billion neurons in humans. Even so, the animal is capable of learning and its brain cells communicate in ways identical to human neuron-to-neuron messaging.?

Like a meticulously-crafted spider web, most neurons sport thousands of strands that connect to other neurons. To journey between certain neurons, a signal must flow along the correct strands and intersections. Similarly, to store a memory that pathway, called a synapse, must be strengthened.?

In past studies, scientists have found that once the route-map gets made, the sea slug marks the synapses connecting the relevant neurons. Next time the slug gets pinched, a certain protein gets sent out to all the synapses in a neuron. When the protein reaches a marked synapse, it triggers other molecules there to produce new proteins that strengthen the neuron-to-neuron connection.

To find out the genetic conductors of such learning and memory, scientists led by Leonid Moroz of the University of Florida Whitney Laboratory for Marine Bioscience studied gene activity in the sea slug's central nervous system, including genes known to switch on and off during a simple defensive maneuver--when the slug withdraws its gill.

Specifically they looked at the so-called transcriptome, a small percentage of genes that get copied to form molecules of ribonucleic acid (RNA). These molecules deliver directions for making proteins, which are key players in how cells operate.????

They found specific genes linked to learning and memory. "We've now identified a whole bunch of receptors for serotonin. So we can see what their function is in various cells and which ones participate in the learning process," Kandel told LiveScience.

The scientists also analyzed 146 human genes implicated in 168 neurological disorders, including Parkinson's and Alzheimer's diseases, and genes controlling aging. They found 104 counterpart genes in Aplysia, suggesting the animal will be a valuable tool in understanding and ultimately treating neurodegenerative diseases.

The study is detailed in the Dec. 29 issue of the journal Cell.