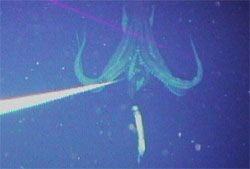 'It is a Whopper:' Giant Squid on Beach

In this photo released by Tasmania Parks and Wildlife Service, a giant squid is seen after it washed up onto Ocean Beach in Strahan, Tasmania, Tuesday, July, 10. 2007. The squid, measuring 1 meter (3 feet) across at its widest point and 8 meters (26 feet) from the tip of its body to the end of its tentacles, was found early Wednesday by a beachcomber at Ocean Beach on the island state of Tasmania's west coast.

Giant squid are almost never observed in the wild, but beached specimens have taught scientists about their anatomy.

An autopsy of a beached giant squid in Canada.

Scientists estimate that giant squid can grow up to about 60 feet (18 meters) long, including their massive tentacles.

The beak of a giant squid. The animals are apparently skilled hunters, eating fish and other squid.

The tentacle of a giant squid, sporting large suckers.