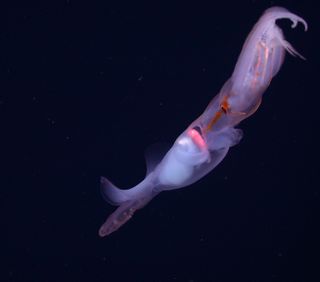 Grimalditeuthis bonplandi does not have suckers on its feeding tentacle (not seen here) as most squid do.
(Image: © © 2013 MBARI )

Not all squid are made alike, and the first-ever footage of one sluggish deep-sea species demonstrates just how varied these elusive animals can be.

Grimalditeuthis bonplandi — a small, translucent squid measuring up to about 6 inches (150 millimeters) long — inhabits the deep ocean between 1,600 and 5,000 feet (500 and 1,500 meters) below the sea surface. Researchers have previously only studied it based on dead, often broken specimens captured in research trawls and the stomach contents of predators.

But now, scientists based at the Monterey Bay Aquarium Research Institute (MBARI) in Moss Landing, Calif., have captured the first-ever video footage of the species in its natural environment and the second-ever full-body specimen, dramatically improving biologists' understanding of how the animal lives. [See Photos of Stunning Deep-Sea Squid Feeding]

Most squid feed by rapidly lashing and ensnaring prey with suckered feeding tentacles, but G. bonplandi lacks both tentacle suckers and the musculature required for speedy tentacle-whips. Instead, the smooth, flat tip of its single feeding tentacle languidly undulates through the water like a sea-worm, seemingly in an effort to lure prey, such as small shrimp and other crustaceans. The team reports their findings today (Aug. 27) in the Proceedings of the Royal Society B. "It's definitely an interesting and unexpected tactic," said study co-author Henk-Jan Hoving, who worked as a postdoctoral researcher at MBARI during the study and is now a researcher at Geomar in Kiel, Germany.

While several other squid species are known to use sucker-alternatives to capture prey, none have been found seemingly to lure prey with their tentacles in this way.

The group happened upon the surprising behavior while conducting unrelated deep-sea surveys with an underwater robot called a remotely operated vehicle (ROV). Equipped with sampling arms, lights and cameras, the ROV cruises through the water-column while tethered to a research vessel, transmitting video footage to scientists onboard who maneuver it to hover around, record and sometimes capture specimens of interest.

The team recorded and captured one G. bonplandi individual from the Monterey Bay in 2005, and video-recorded, but did not capture, six additional individuals during later cruises in the Gulf of Mexico. In total, the team gathered more than 25 minutes of behavioral footage.

Having preserved and dissected the captured specimen to better understand the anatomy of its feeding tentacle, the researchers found that it did not contain the musculature needed to rapidly extend and retract it in the way that most other squid do. The video footage of the live specimens showed the feeding tentacle flapped and undulated, but it did not demonstrate how exactly the movement might lure prey. The team speculated the undulations may attract prey by stirring up bioluminescence in the water or by sending vibrations through the water column that mimic the squid prey's own prey. [Under the Sea: Amazing Photos of Deep-Sea Squid]

Richard Young, an emeritus professor of biology at the University of Hawaii and a leader in cephalopod research, is excited by the findings and said both of these behavioral explanations sound plausible.

Young noted that the squid's remarkably thin tentacle is prone to breaking, unlike the sturdier tentacles of most other squid, which could suggest that G. bonplandi uses its arms rather than its tentacle to transport prey to its mouthpart. However, more work would be needed to verify this and understand the full extent of the squids feeding behavior.

"There is a lot of stuff we don't know going on in the deep sea, and there are only so many assumptions we can make," Young said.

While underwater vehicles such as ROVs provide invaluable opportunities to observe an otherwise inaccessible world, they also introduce inherent complications in behavioral studies by stirring up water and flooding light on animals accustomed to living in darkness. MBARI engineers are currently working to improve ROV design, and Hoving hopes that future advancements in low-light and low-disturbance ROVs will facilitate more detailed and accurate understanding of deep-sea behaviors.

"It's a very exciting time, because we can combine these advances in technology with exploration of the deep-sea, revealing more and more peculiar behaviors of animals," Hoving said.

The team hopes to follow up their work on G. bonplandi, but this will depend on future chance encounters in the vast expanse of the deep sea.

Editor's Note: The author interned in the MBARI Communications Office during the winter of 2013, but is no longer involved in that work.