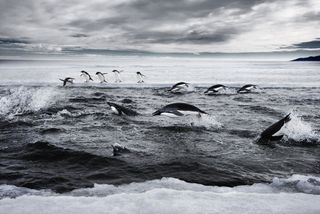 A mini remotely operated underwater vehicle has explored the Ross Sea in Antarctica, where penguins got cozy with it. And scientists think the public could use thousands of such robots to explore the world's oceans.
(Image: © John B. Weller)

"The deep has even more cool stuff than space," said Eric Stackpole, a researcher at NASA Ames Research Center in Mountain View, Calif.

For instance, there's a possibility that alien life exists on distant exoplanets, but scientists know for sure that hundreds or thousands of undiscovered species lurk beneath the waves, Stackpole said Sunday (May 19) here at the 2013 Maker Faire Bay Area, a two-day celebration of DIY science, technology and engineering. [Maker Faire Bay Area 2013 (Photos)]

And it’s not just scientists who can do the discovering: Interested amateurs could launch an army of these DIY submarines to reveal the mysteries of the deep.

Stackpole is the co-founder of OpenROV, an organization that has created an open-source, underwater vehicle that can explore up to 328 feet (100 meters) beneath the ocean's surface.

The submarine is the size of a shoebox and is made with off-the-shelf, $10 electronics, such as thrusters and motors, and laser-cut acrylic. It wirelessly connects to a remote controller, and can descend at 3.28 feet (1 meter) per second.

So far, these rovers have plumbed the depths of the flooded Hall City Cave in northern California, which is rumored to harbor gold, and spent time at the Aquarius Underwater Laboratory off Key Largo, Fla., where aquanauts spend 10 days underwater. An open remotely operated vehicle (ROV) has even dived beneath the ice in the Ross Sea in Antarctica, where penguins also got cozy with the underwater vehicle.

The proliferation of underwater robots could change how scientists explore the deep. The expense of building underwater robots has typically meant that researchers get grant money to answer existing questions about the ocean. But so much of the deep is unexplored that citizens could reveal many different insights simply by chance, Stackpole said.

"I don't think you have to ask questions to get answers," Stackpole told LiveScience. "I think the kind of things that we've discovered just by chance — the transistor, penicillin — were because people were just [looking] around and saw something interesting."

ROVs could also help researchers answer much bigger scientific questions than they previously could.

For instance, a marine biologist who wants to know what a specific species of sea creature looks like around the world could rally citizen scientists to deploy their ROVs to answer the question.

"We're in 50 countries, and we've been on every continent," Stackpole said. "Let’s start exploring."