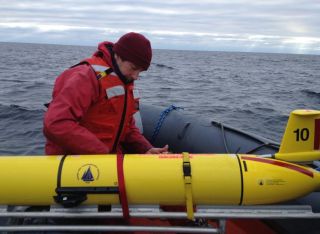 The whales are thought to use the area to mate between November and January, according to a release from the Woods Hole Oceanographic Institution (WHOI) in Massachusetts, whose researchers led the project.

The finding was reported to the National Oceanographic and Atmospheric Administration's Fisheries Services, which is charged with protecting these animals under the Marine Mammal Protection Act. The agency put in place a "dynamic management area," meaning mariners in the area were asked to slow their vessels to avoid striking the animals.

The robots also detected fin, sei and humpback whales in the area, the first time autonomous vehicles have recorded songs of multiple whale species. The animals were recorded about 60 miles (97 kilometers) south of Bar Harbor, Maine, according to the release. Besides listening for whale song, the robots also tested a number of variables to see why the area might be an appealing breeding ground, measuring water temperature and salinity, as well as samples of water to look for tiny animals called zookplankton upon which the whales feed.

The 6-foot-long (1.8 meters) underwater robots look like yellow torpedoes, and use a quiet motor to submerge themselves before surfacing every few hours to transmit data back to computers and researchers on land.

The information the robots provide is essential for understanding the whale's behavior in this area, which is little studied since the animals usually pass through in the late fall and winter when temperatures are freezing and weather is unforgiving, the release noted.

Detection of the whale song allowed researchers aboard the research vessel, Endeavor, to locate the whales and take photographs of them. This allowed scientists to identify four previously known right whales. The robots represent a large improvement of the previous methods used to find whales: the human eye.

"We've been doing visual based surveys for a long time — either from a plane or a boat," said Sofie Van Parijs, a collaborating researcher, in the statement. "They have a lot of value, but they are limited, especially at certain times of the year. These gliders provide a great complement to this system. Knowing where right whales are helps you manage interactions between an endangered species and the human activities that impact those species."