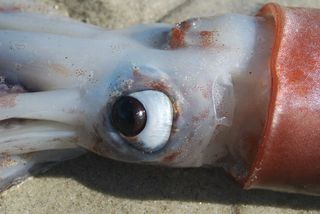 Scientists had noticed such strandings in many squid species for decades, but why they happened was a mystery

While Humboldt squid (or jumbo squid) can reach 5 feet (1.5 meters) in length, the squid washing ashore in Monterey Bay are mostly juveniles about 1-foot (0.3 meters) long.

Researchers have noticed that schools of squid tend to beach en masse when they are invading a new territory, possibly because they get lost.

But during the most recent strandings, scientists noticed that the squid beached in 3-week cycles during red tides, or poisonous algal blooms

The timing of the red tides suggests that the squid may be intoxicated and disoriented by the neurotoxin.

These squid haven't been seen in the Monterey Bay for a few years, which means the current crop of squid beaching themselves are unfamiliar with the area.

Dead Set For the Beach

Sometimes people will toss squid back into the water after a stranding, only to have them turn around and head right back for the beach, researchers say.

Beach strandings have occurred for decades and, though mysterious, probably aren't a sign of bigger problems in the environment, scientists say.