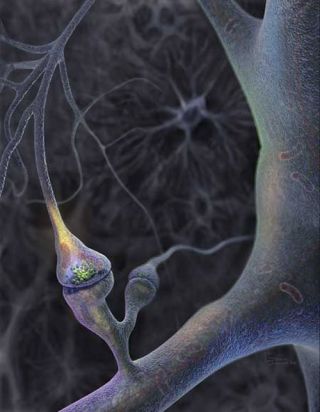 An illustration of a synapse, which won first prize in the illustration category in the 2005 Science Magazine and NSF Science and Engineering Visualization Challenge.
(Image: © Graham Johnson/NSF)

The apocryphal tale that you can't grow new brain cells just isn't true. Neurons continue to grow and change beyond the first years of development and well into adulthood, according to a new study.

The finding challenges the traditional belief that adult brain cells, or neurons, are largely static and unable to change their structures in response to new experiences.

The study, performed in adult mice, found that the branch-like projections on some neurons, called "dendrites," were still physically malleable. Dendrites conduct electrical signals received from other neurons to the parent neuron's cell body. The changes occurred both incrementally and in short bursts, and involved both growth and shrinkage.

Some of the changes were dramatic by neuron standards. One dendrite sprouted an impressive 90 microns (about .003 inches), more than doubling its length in less than two weeks.

"The scale of change is much smaller than what goes on during the critical period of development, but the fact that it goes on at all is earth-shattering,"said study co-author Elly Nedivi, a neuroscientists at the Massachusetts Institute of Technology (MIT).

During the early years following birth, humans manufacture an estimated 250,000 neurons per minute and then spend the next few years wiring them together. Traditionally, it was assumed that this neural plasticity settles down by adulthood.

Neuroscientists have known for decades that adult neurons can change their firing pattern and responses when faced with new experiences, but whether they could change their structures remained an open question.

Looking in the wrong places

Neurons communicate with one another by exchanging either electrical or chemical signals across tiny gaps where two neurons meet, called synapses. The signals can be either excitatory or inhibitory, meaning they either increase or decrease, respectively, the activity of the neuron they're affecting.

Other studies looking into adult neuron growth focused mainly on excitatory pyramidal neurons, but the MIT study examined other neuron types as well. The researchers found that while pyramidal neurons didn't exhibit any structural changes—which is consistent with previous reports—a group of inhibitory neurons called "interneurons"did.

The researchers estimate that on average, about 14 percent of the interneurons they observed showed structural modifications.

Approximately 20 to 30 percent of the neurons in the neocortex, the part of the brain responsible for higher functions such as thought, are made up of inhibitory interneurons. These neurons are believed to play an important role in regulating brain activity by delaying or blocking signals from excitatory neurons.

The researchers speculated whether interneurons might be largely responsible for neural plasticity in adult brains.

"Maybe the inhibitory network is where the capacity is for large-scale changes,"Nedivi said.

The study, led by Wei-Chung Allen Lee of MIT, was detailed in the Dec. 27 issue of the journal for the Public Library of Science (PLOS) Biology.