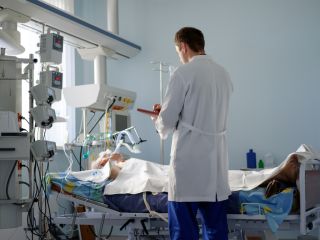 A New Jersey hospital kept a patient alive in a vegetative state for nearly a year — not because the patient or his family requested it, but because the medical staff wanted to maintain the survival rate statistics used to evaluate their heart-transplant program, according to an investigative report by ProPublica.

As Caroline Chen reported, in recordings of his meetings with medical staff, the director of the hospital's heart and lung transplant programs said, "I'm not sure that this is ethical, moral or right," but it's "for the global good of the future transplant recipients."

What ProPublica uncovered was an incredible breach of medical ethics — and not just because his family was deprived of the opportunity to decide what was the best care option for him. To fully appreciate why, you only need to understand what being in a "vegetative state" really means. A vegetative state differs both from a coma and brain death. Being in a persistent vegetative state for over a year means that a person is unlikely to recover, but it does not mean that a person cannot feel pain or discomfort. In this case, the hospital staff prioritized their own prerogatives over their patient's quality of life.

When a patient enters a vegetative state

Sixty-one-year-old Darrel Young underwent heart transplant surgery on Sept. 21, 2018, at Newark Beth Israel Medical Center. Young never awoke from surgery, instead falling into a vegetative state. If he had died, the hospital's heart transplant program survival rate would have dropped to 84.2% — which would have triggered scrutiny by the federal government.

In a recording, transplant program director Dr. Mark Zucker said the team would "need to keep [Young] alive till June 30 at a minimum." It was then that a federally funded organization that tracks transplant survival rates would file its next report. "If he's not dead in this report, even if he's dead in the next report, it becomes an issue that moves out six more months," Zucker said in a recording.

So Young was kept alive in a vegetative state. But what exactly does that mean? The term "vegetative state" sounds a lot like "coma" or "brain-dead," but there are actually clear distinctions between each of these conditions.

The term "vegetative state" conjures images of patients lying still in hospital beds , unresponsive, their heart-rate monitor bleeping quietly in the background. In reality, people in a vegetative state may move, groan, and open their eyes, according to Johns Hopkins Medicine. Although their consciousness is diminished, a vegetative patient may perform involuntary muscle movements and react to loud sounds or feelings of pain. They may also exhibit wake-sleep cycles, meaning they continue to wake up in the morning, then fall asleep at night as they did when they were healthy.

At first glance, a patient in a persistent vegetative state resembles one in a coma, but comatose patients are far less responsive.

Both vegetative and comatose patients retain some brain stem function, meaning that they maintain some ability to breathe on their own, and exhibit other reflexes, like pupil dilation in response to bright lights, according to the Finger Lakes Donor Recovery Network. However, comatose patients do not open their eyes, nor do they speak. Their condition may resolve in a few days or weeks, or the patient may progress to a vegetative state, according to Johns Hopkins Medicine.

Related: What Is a Medically Induced Coma?

When patients fall into a profoundly deep coma, the electrical activity in their brains may even flatline, but research suggests that even these patients can eventually come back online,  Live Science previously reported.

Brain-death is a different story.

When brain death occurs, the organ loses all functionality, including that of the brain stem, according to the Cleveland Clinic. These patients may sweat or perform spontaneous limb movements, but they are unconscious, unresponsive, and cannot breathe properly without the support of a respirator. A test known as the "apnea test" determines whether the patient displays respiratory responses supported by the brain stem, according to ClinicalTrials.gov. The test involves saturating a patient's blood with oxygen then removing them from their ventilator to see if their respiratory response kicks in. Specific levels of carbon dioxide in a person's arterial blood and physical signs of breathing indicate that they are not brain dead.

If the patient shows no respiratory response  at this point, they can be declared both clinically and legally dead, according to the legal information site FindLaw.

From the depths of his vegetative state, Darrel Young would occasionally open his eyes, according to ProPublica, but his medical records noted that he "follow[ed] no commands. He look[ed] very encephalopathic," meaning his brain had clearly been damaged — in fact, the organ suffered injury during Young's transplant surgery.

Doctors have trouble predicting which people will recover after a brain injury puts someone into a vegetative state, though monitoring for distinct patterns of brain activity may help doctors predict which patients are most likely to pull through, Live Science reported. A 2017 study also suggested that nerve stimulation may help revive vegetative patients, even in people who were in that state as long as 15 years.

Generally, patients who enter a vegetative state for more than four weeks are considered unlikely to recover, and their chances only worsen after a full year in limbo, according to Johns Hopkins. Though doctors at Newark Beth Israel told Young's family he may make a "full recovery," in truth, they expected no such outcome, ProPublica reported. In the meantime, they kept Young alive.

Related: Detecting Brain Activity in Coma Patients Can Be Scary for Families (Op-Ed)

Patients can be sustained in a vegetative state as long as their healthcare providers give standard supportive care, according to the medical reference site Merck Manual. This includes providing adequate nutrition and water, normally through a feeding tube; administering physical therapy to keep the muscles from seizing up; and working to prevent the development of disease or infection made more likely by the patient being immobilized (such as bedsores).

Young was treated for pneumonia, strokes, seizures and a fungal infection while in his vegetative state, according to the investigative report. He was also placed on a ventilator overnight to support his breathing, and nurses pumped mucus from a hole in his throat several times a day.

Young made it to the one-year anniversary of his operation, ProPublica reported, and thus Newark Beth Israel met their transplant survivor quota. The patient's family was informed that Young could now be transferred to a long-term care facility, and his sister asked why he was suddenly being moved after a year of stagnation. She never received a clear answer.

You can read the full, shocking story at ProPublica.