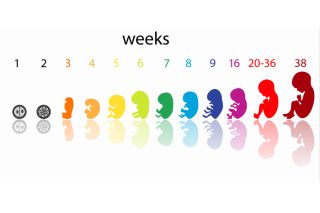 For a pregnant woman, feeling a new life developing inside her body is an amazing experience, even though she may not always feel her best at some points along the way.

Pregnancy can be different from woman to woman, and even for the same mother from one pregnancy to the next. Some symptoms of pregnancy last for several weeks or months, while other discomforts are temporary or don't affect all women.

"Pregnancy is a long, 10-month journey," said Dr. Draion Burch, an obstetrician and gynecologist at Magee-Womens Hospital at the University of Pittsburgh Medical Center.

A normal pregnancy usually lasts about 40 weeks, counting from the first day of a woman's last menstrual period, which is about two weeks before conception actually occurs.

Pregnancy is divided into three trimesters. Each of these periods lasts between 12 and 13 weeks.

During each trimester, changes take place in a pregnant woman's body as well as in the developing fetus, and a summary of these changes will be described below.

About two weeks after a woman has her period, she ovulates and her ovaries release one mature egg. The egg can be fertilized for 12 to 24 hours after it's released as it travels down the fallopian tube toward the uterus.

If an egg meets up with a sperm cell that has made its way into the fallopian tube, it combines into one cell, a process that's known as fertilization or conception.

According to the Cleveland Clinic, it takes about three to four days for the fertilized egg (or embryo) to move to the lining of the uterus, where it attaches or implants to the uterine wall. Once the embryo is implanted, the cells start to grow, eventually becoming the fetus and the placenta, which is tissue that can transport oxygen, nutrients and hormones from the mother's blood to the developing fetus throughout pregnancy.

A woman will experience a lot of symptoms during her first trimester as she adjusts to the hormonal changes of pregnancy. In the early weeks, the pregnancy may not be showing much on the outside of her body, but inside many changes are taking place.

For example, human chorionic gonadotrophin (hCG) is a hormone that will be present in a woman's blood from the time conception occurs. Levels of hCG can be detected in a woman's urine about a week after she has a missed period, and it is why a woman will have a positive result on a home pregnancy test.

Other hormonal changes can contribute to pregnancy symptoms: Rising levels of estrogen and hCG may be responsible for the waves of nausea and vomiting known as morning sickness that a woman typically feels during her first few months of pregnancy. Despite its name, morning sickness can occur any time of day.

A woman will also feel more tired than usual during the first trimester, a symptom that's linked with rising levels of the hormone progesterone, which increases sleepiness. She may also need to urinate more frequently as her uterus grows and presses on her bladder.

Early in pregnancy, a woman's breasts will feel more tender and swollen, another side effect of rising levels of pregnancy hormones. Her areolas, the skin around each nipple, will darken and enlarge.

A pregnant woman's digestive system may slow down to increase the absorption of beneficial nutrients. But reduced mobility of the digestive system might also trigger such common complaints as heartburn, constipation, bloating and gas, according to the Office on Women's Health (OWH).

Many parts of the body will work harder during pregnancy, including a woman's heart. Her heartbeat will increase to pump more blood to the uterus, which will supply it to the fetus.

As more blood circulates to a woman's face, it will give her skin a rosier complexion, described as a "pregnancy glow."

Besides the physical changes in a woman's body, she may also experience emotional highs and lows in the early months of her pregnancy and throughout it. These emotions may range from weepiness, mood swings and forgetfulness to fear, anxiety and excitement.

A developing baby is called an embryo from the moment conception takes place until the eighth week of pregnancy.

During the first month of pregnancy the heart and lungs begin to develop, and the arms, legs, brain, spinal cord and nerves begin to form, according to the American College of Obstetricians and Gynecologists (ACOG).

The embryo will be about the size of a pea around one month into a pregnancy, Burch said. Around the second month of pregnancy, the embryo has grown to the size of a kidney bean, he explained. In addition, the ankles, wrists, fingers and eyelids form, bones appear, and the genitals and inner ear begin to develop.

After the eighth week of pregnancy and until birth occurs, a developing baby is called a fetus.

By the end of the second month, eight to 10 of the fetus' main organs will have formed, Burch said. At this stage of pregnancy, he stressed, it's extremely important that pregnant women do not take harmful medications, such as illegal drugs. The first trimester is also the period when most miscarriages and birth defects occur.

During the third month of pregnancy, bones and muscles begin to grow, buds for future teeth appear, and fingers and toes grow. The intestines begin to form and the skin is almost transparent.

By the second trimester, some of the unpleasant effects of early pregnancy may lessen or disappear as a woman's body adjusts to its changing hormone levels. Sleeping may get easier and energy levels may increase.

Nausea and vomiting usually get better and go away, Burch told Live Science. But other symptoms may crop up as the fetus continues its growth and development.

Women feel more pelvic pressure, Burch said, adding that the pelvis feels heavy like something is weighing it down.

A more visible baby bump appears as the uterus grows beyond a woman's pelvis, and the skin on her expanding belly may itch as its stretches, according to the OWH.

As the fetus is getting bigger and a woman is gaining more pregnancy weight in the front of her body, she may also experience more back pain, Burch said.

Sometime between the 16th and 18th weeks of pregnancy, a first-time mother may feel the first fluttering movements of the fetus, known as quickening, Burch said. If a woman has had a baby before, she is likely to feel the fetus kicking, squirming or turning even sooner because she knows what to expect, he explained.

The 20th week usually marks the halfway point of a woman's pregnancy.

Burch encourages his patients to take a "baby-moon" — a mini-vacation or weekend getaway — during the second trimester, and he said the best time to get away is around the 28th week of pregnancy. A woman is generally feeling pretty good at this point, there's a lower risk of miscarriage and premature labor, and some health professionals may discourage airplane travel after the 36th week.

Second trimester development of the fetus

In the second trimester, the fetus is growing a lot and will be between 3 and 5 inches long, Burch said. Sometime between 18 and 22 weeks, an ultrasound may reveal the sex of the baby, if parents want to know this information in advance.

By the fourth month of pregnancy, eyebrows, eyelashes, fingernails and the neck all form, and the skin has a wrinkled appearance. In addition, during the fourth month the arms and legs can bend, the kidneys start working and can produce urine, and the fetus can swallow and hear, according to ACOG.

In the fifth month of pregnancy, the fetus is more active and a woman may be able to feel its movements. The fetus also sleeps and wakes on regular cycles. A fine hair (called lanugo) and a waxy coating (called vernix) cover and protect the thin fetal skin.

By the sixth month of pregnancy, hair begins to grow, the eyes begin to open and the brain is rapidly developing. Although the lungs are completely formed, they don't yet function.

During the third trimester, as a woman's enlarged uterus pushes against her diaphragm, a major muscle involved in breathing, she may feel short of breath because the lungs have less room to expand, according to Johns Hopkins Medicine. Her ankles, hands, feet and face may swell as she retains more fluids and her blood circulation slows.

A mother-to-be will need to pee more frequently because more pressure will be placed on her bladder. She may also have more backaches and more pain in the hips and pelvis, as these joints relax in preparation for delivery.

Her face may develop dark patches of skin, and stretch marks may appear on her belly, thighs, breasts and backside. She may also notice varicose veins on her legs.

In the third trimester, a woman's breasts may experience some leakage of colostrum, a yellow liquid, as they get ready for breastfeeding, according to the OWH. The baby will drop lower in her abdomen.

False labor, known as Braxton-Hicks contractions, may begin to occur as a woman gets closer to her due date. A "nesting instinct" may kick in as a mother-to-be and her partner baby-proof their home, shop for baby items, prepare the nursery and await their new arrival.

During the final weeks of pregnancy, it will become harder to find a comfortable sleeping position, so women may be extremely tired, Burch said.

As delivery approaches, some women love the experience of being pregnant, while others may feel like they can't wait for it to end, Burch said.

Third trimester development of the fetus

By the seventh month of pregnancy, the fetus kicks and stretches, and can even respond to light and sound, like music, Burch said. Eyes can open and close.

During the eighth month of pregnancy, the fetus gains weight very quickly. Bones harden, but the skull remains soft and flexible to make delivery easier. Different regions of the brain are forming, and the fetus is able to hiccup, according to ACOG.

The ninth month is the home stretch of pregnancy, and the fetus is getting ready for birth by turning into a head-down position in a woman's pelvis. The lungs are now fully mature to prepare for functioning on their own. The fetus continues to gain weight rapidly.

The new definition of a full-term pregnancy is when a baby is born after 39 to 40 weeks (it used to be 37 weeks), Burch said.