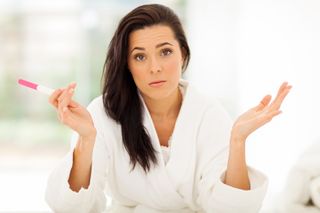 Your body goes through a number of changes in the earliest stages of pregnancy.
(Image: © michaeljung | Shutterstock)

When a woman finds out that she is pregnant, it can be the start of a remarkable, life-changing experience.

The first sign is usually a missed period, followed by a pregnancy test, said Lia Moss, a certified nurse midwife at Northwestern Medicine, who delivers babies at Prentice Women's Hospital in Chicago.

Pregnancy tests, whether done at home or at a doctor's office, measure the amount of human chorionic gonadotropin (hCG) in a woman's urine or blood. This hormone is released when a fertilized egg attaches to the lining of the uterus. Urine pregnancy tests can detect levels of hCG about 10 days after conception, Moss told Live Science, while blood tests, usually done at a doctor's office, can detect a pregnancy about seven to 10 days after conception. Testing too soon can produce a false negative result.

Women typically have many of the early signs of pregnancy, with the most common symptoms being fatigue, breast tenderness, nausea and bloating, Moss said. But not all women will have the same symptoms in early pregnancy or will experience them to the same extent.

"The first trimester can be very hard for some women," Moss said, but after that many mothers-to-be start feeling better.

Here are 10 clues that a woman may notice during her first trimester to indicate she may be pregnant:

Often the first tipoff of pregnancy is a missed period. However, there are other reasons for missing a period. Perhaps a woman is not keeping track of her menstrual cycle, or maybe its length is irregular from month to month. Other explanations for why a woman could be late include excessive exercise, gaining or losing too much weight, stress, illness or breastfeeding, according to the National Institutes of Health.

Two weeks after conception, a pregnant woman may experience a scant amount of vaginal bleeding or light spotting, Moss said. The blood may be pink to brown in color, she said, and it may also be accompanied by mild cramping, so a woman may think she is about to start her period.

Known as implantation bleeding, it occurs when the fertilized egg attaches to the wall of the uterus. This slight bleeding tends to happen right around the time a woman may be expecting her period, but it's shorter and much lighter than menstrual bleeding.

Six weeks after a missed menstrual cycle or two weeks after conception, a woman may notice that her breasts feel fuller, and her nipples may be more sensitive, Moss said. This is caused by increased levels of the hormones progesterone and estrogen, as well as increased blood flow to this area, she explained. To feel more comfortable at night, some pregnant women may sleep in a light supportive sports bra, Moss suggested.

Another very early clue to pregnancy is that the skin surrounding a woman's nipples, known as areolas, might darken and get bigger — another effect of early-pregnancy hormones.

Being exhausted is very common during the first trimester of pregnancy, as well as during the last few months before delivering. This is most likely caused by rising levels of the hormone progesterone in early pregnancy, Moss said.

Women may notice they feel more sluggish and sleepy than usual as early as one week after conception, suggests the American Pregnancy Association.

It makes sense that the body feels wiped out more easily during the early phases of pregnancy because blood volume increases to supply the developing placenta and fetus with nutrients, which causes a woman's heart to work harder.

Moss said she dislikes the term "morning sickness" because the queasiness and throwing up can strike any time of day or night. Women may begin to feel sick to their stomachs between the sixth and 12th weeks of pregnancy, and some women may start to feel relief by week 14, she said.

The bouts of nausea and vomiting affect 70 to 85 percent of pregnant women, according to The American Congress of Obstetrics and Gynecology (ACOG). These symptoms are likely triggered by the hormonal changes of pregnancy.

To ease the symptoms, Moss recommends eating small, frequent meals, resting as much as possible, choosing blander foods without strong smells and drinking ginger tea. Other remedies include eating a few crackers in the morning before getting out of bed, consuming high-protein snacks, such as yogurt, and avoiding spicy and fatty foods, according to ACOG. [Related: Pregnancy Diet & Nutrition: What to Eat, What Not to Eat]

In the early weeks of pregnancy, a woman may not yet be "showing," but her abdominal area may feel softer and fuller, Moss said. This is likely caused by increased levels of the hormone progesterone, she explained.

During the early months of pregnancy, a woman may feel like she is on an emotional roller coaster as changes in hormone levels affect her body and mind.

"It's normal for women to feel on edge, like they are having premenstrual (PMS) symptoms," Moss said. For some women, this may make them act a little more irritable than usual, while others get a little more down or weepy, she explained.

Besides adjusting to shifting hormone levels, a woman's moodiness can also be caused by some of the physical changes of early pregnancy, such as fatigue and morning sickness, as well as the emotional changes in her life, including the stress of becoming a parent, worries over having a healthy baby and financial concerns about adding a new family member.

8. Changes in urination and bowel movements

Beginning about six weeks into the first trimester and throughout her pregnancy, a woman may need to pee more frequently.

Frequent bathroom visits happen in early pregnancy because the kidneys are working harder to filter the extra fluids in the body, such as an increased volume of blood. As the months pass and the fetus grows and develops in a woman's uterus, it can put pressure on her bladder, causing a need to urinate more often than usual, according to the March of Dimes.

Constipation may be caused by extra progesterone, which can slow down the digestive system so that more nutrients can reach the fetus. Pregnancy hormones can also relax muscles that push waste products through the intestines. Being physically active, drinking lots of liquids and increasing dietary fiber can all help ease constipation, suggests the Mayo Clinic.

Getting headaches is a common symptom during the first trimester, Moss said. They could be a sign of hunger or dehydration, or may even be caused by caffeine withdrawal, she explained.

Some women may feel dizzy or lightheaded during the early months of pregnancy. The wooziness can be related to low blood sugar or dehydration, Moss said. Dizziness can also result from blood shifts in the body, especially when a woman changes position, for example from sitting to standing, or when she gets out of bed. If a woman faints, she should contact her health provider, she advised.

Hot flashes and night sweats don't just appear during the period before menopause, they may also affect women in early pregnancy. In a 2013 study in the journal Fertility and Sterility, more than a third of women reported having either hot flashes or night sweats during pregnancy. Doctors think that rapid fluctuations in hormones such as estrogen may be behind these changes, according to the study.

Pregnancy leads to an increased metabolic rate, which can make women feel generally hotter, especially when they sleep, Kathy Lee, a professor of nursing at the University of California San Francisco, who has studied how pregnancy affects sleep, previously told Live Science. Women who track their basal body temperature, or their temperature when they first wake up in the morning, may notice that it stays elevated in the first weeks of pregnancy. That's because of rising progesterone levels, which raise basal body temperature, according to a 2017 study in the journal Bioengineering and Translational Medicine.

This article was updated on Oct. 23, 2018 by Live Science Associate Editor, Tia Ghose.