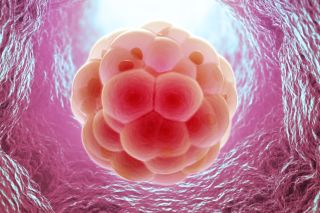 This is part of a Live Science series of articles on the weekly changes that a pregnant woman's body goes through as it adapts to the growing needs of the fetus inside her.

Conception occurs when a man's sperm meets a woman's egg. The egg becomes fertilized, moves into the uterus and implants itself onto the uterine wall. Cells begin dividing, and a fetus starts to develop. However, pinpointing exactly when conception begins is hard to do, because sperm can rest in a woman's body for several days after ejaculation, waiting for an egg.

During the first week of pregnancy, morning basal body temperature — your body temperature when you are completely at rest — will remain elevated. If you are noticing these changes, Pregnancy Corner recommends contacting your health care provider to set an appointment to test for the pregnancy. [Related: When and How to Take a Pregnancy Test]

Although there are few physical changes at this point, you may be noticing internal changes. Digestive issues — like gas, constipation and nausea — may be cropping up. You also may be noticing more fatigue than usual, and mood swings with the changing hormones. Tender breasts and morning sickness may also begin during the first week, though most women won't notice those changes until after the second week of pregnancy. [Related: Are You Pregnant? | Early Signs of Pregnancy]

During conception, a sperm penetrates an egg and forms a zygote, a single set of 46 chromosomes — 23 from the male and 23 from the female. Chromosomes determine the baby's sex and features. This is the beginning of the fetus. Over the first couple of weeks, the zygote travels through the fallopian tube toward the uterus. In the first round of cell division called cleavage, a ball of cells, called a morula, is formed. A cavity forms within the morula, and it now becomes a blastocyst. This blastocyst is made up of two parts — what will become the placenta and the embryo — and eventually ends up in the uterus. Between the first and second week of conception, the blastocyst attaches into the uterine lining, thus beginning the embryonic stage.

After these first weeks of fetal development, basic growth begins, as the brain, spinal cord, heart and gastrointestinal tract begin to form.

In the earliest stages of pregnancy, prenatal vitamins and minerals are very important. Folic acid should be added to the diet. About 400 micrograms a day will help the fetus develop a healthy brain and spinal cord. It's also a good idea to give up alcohol and stop smoking cigarettes. Though a glass of wine or imperfect diet isn't likely to affect the fetal development during the first week of pregnancy, it's still a good idea to get as healthy as possible. [Related: Pregnancy Diet & Nutrition | What to Eat, What Not to Eat]

To prepare for pregnancy, it's important to lay a nutritional foundation for fetal development. Because you aren't always sure if you're pregnant in the first week, you can start those good habits before you even conceive, according to pregnancy advice website What to Expect. Eating less junk food and increasing the intake of leafy greens will not only aid in your baby's growth, but you'll feel better and will be avoiding foods that could make you nauseous or gassy.

If you have been taking over-the-counter medications, prescriptions or herbal supplements, consult with a health care provider, to make sure that they are safe for pregnancy.

The mother's fitness is important to the health of the baby. Staying fit with 30 minutes of moderate exercise a day will make pregnancy, birth and recovery easier. [Related: Exercise During Pregnancy | Workout & Fitness Tips]