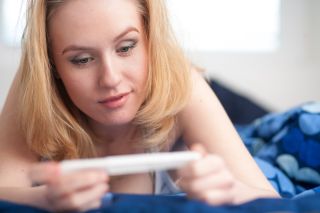 Pregnancy tests today are much faster and more accurate than those of even 40 years ago.
(Image: © Paul Schlemmer | Shutterstock.com)

A home pregnancy test is a quick and easy way for a woman to find out if she might be having a baby. The do-it-yourself kits, which are sold over-the-counter at drug stores, grocery stores and discount stores, check a woman's urine and can detect a pregnancy in its early weeks not long after she misses her period.

Home tests are marketed to women as a tool to use to see if they are pregnant, said Michele Helgeson, a certified nurse midwife and director of midwifery at Brigham and Women's Hospital in Boston. If they receive a positive result, it can be a springboard to seek out medical attention from their health provider for early prenatal care, she said. [Related: Early Signs of Pregnancy]

An earlier diagnosis of a pregnancy can also provide health professionals with the opportunity to advise women about their pregnancy options and to discuss avoiding potentially harmful habits that can affect the developing fetus, such as smoking, drinking alcohol and using illegal drugs.

Previously, pregnancy tests were only done by doctors and nurses, and they were more complicated and took longer to obtain results. They involved getting a woman's urine sample, injecting it into a rabbit, frog or female mouse, and then examining the animal's reproductive system to measure levels of human chorionic gonadotropin (hCG), a hormone found only in pregnant women.

The first home pregnancy test kits were approved by the FDA and widely marketed in the United States in the late 1970s. The test consisted of purified water, a test tube containing sheep red blood cells and a medicine dropper. It also relied on getting a urine sample to test for hCG, and it took two hours to obtain the results.

The benefits of a home test were that it protected a woman's privacy about her sexual activity. It also made it quicker and more convenient for a woman to figure out whether she might be pregnant early on in the process.

These days, there are dozens of brands of home pregnancy tests, and they typically sell for $15 to $20 for two tests. Pregnancy test kits are among the most widely used products for home diagnostic testing.

What the test measures

Home pregnancy tests measure hCG levels in the urine. This hormone, found only in women once a pregnancy is achieved, is produced by the placenta shortly after a fertilized egg implants in the uterus.

In early pregnancy, the amount of hCG doubles in the blood every 48 to 72 hours, and then levels of the hormone plateau during the second trimester, Helgeson told Live Science.

"To have the best results, it's probably better for women to wait about one week after a missed period to do the test," Helgeson said. This leaves a broader window, especially for women who have irregular menstrual cycles that are typically shorter or longer than a 28-day cycle.

The test is done by collecting a urine sample in a cup and then dipping a test strip into the cup or using a medicine dropper to place urine onto a test strip. It can also be done by holding a test strip in the urine stream as a woman goes to the bathroom.

Tests recommend using midstream urine, which means peeing first into the toilet and then into the cup to collect the sample. A woman will receive her pregnancy test results quickly, often in a few minutes.

Some manufacturers claim a 99 percent accuracy rate, if tests are used on the first day of a missed period. But some research has called into question the accuracy of these claims.

Depending on the test, results may be given as a plus or minus sign, a single or double line, a color change, or a digital readout saying "pregnant" or "not pregnant."

Several factors can affect test results: Taking the test too early in the pregnancy when hCG levels are not high enough to be detected can influence the accuracy of results.

Medications that contain the pregnancy hormone hCG, such as some fertility treatments used when a woman is having trouble becoming pregnant, may affect pregnancy test results and produce a false-positive reading. This is a test that says a woman is pregnant when she is not.

But most medications, such as birth control pills, pain relievers or antibiotics, will not interfere with results. Drinking alcohol or using recreational drugs will also not affect test results, but these behaviors are not advisable if a woman is trying to become pregnant.

Depending upon when a woman has her first prenatal visit, it's customary for some medical practices to repeat a urine pregnancy test at their offices or do a blood test, Helgeson said. She said that if a woman is further along in her pregnancy, such as in her eighth week or beyond, her health care provider might do an ultrasound scan instead to determine the viability of the pregnancy and her due date. "This is determined on an individual basis," Helgeson explained.

Home tests vs. tests at a doctor's office

The urine-based pregnancy test done in a provider's office is similar to the one that's done at home and is based on the same principle, hCG levels, Helgeson said. She explained that a blood test for pregnancy, known as the beta hCG test, trumps a urine test because it is more sensitive at detecting hCG.

A blood test can detect a pregnancy earlier than a urine test, by detecting low levels of hCG in blood as early as six to eight days after ovulation. But a blood test can only be performed in a doctor's office or clinic, and it might take longer to get results, according to womenshealth.gov.

Follow directions carefully: For best results, read package directions thoroughly and follow them closely, especially instructions about how and when to do the test, and waiting enough time to read the results. Be sure to use the test before its expiration date posted on the package, and store the kit in a dry place at room temperature.

Do a morning test: A woman should use her first morning urine to do the test because it has more hCG in it. Urine becomes more dilute as a person drinks more liquids during the day, Helgeson said. Although not all tests recommend using the first morning urine, this sample will contain the highest levels of pregnancy hormone.

Retesting may be needed: If a woman suspects she is pregnant and gets a negative test result, she should repeat the test several days to a week later because hCG levels rise rapidly during early pregnancy.

Timing matters: Testing too close to conception or too early after a missed period may produce incorrect results because the placenta has not yet had time to produce enough hCG to be detected by the test.

Seek additional help: If a woman has questions about the product, its correct use or whether studies have been done on the test's accuracy, she can get in touch with the manufacturer by phone or through the online contact information listed on the box.