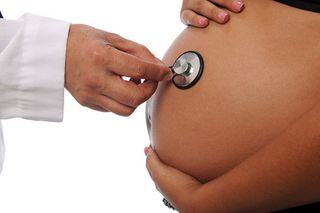 Bleeding during pregnancy can be frightening, but it's not always a sign of trouble.
(Image: © Pregnant belly image via Shutterstock)

When a woman sees blood on her underpants during pregnancy, it's typically a frightening and worrisome sign. But not all bleeding is a sign of trouble.

Bleeding or spotting can happen at any point during pregnancy, from the time the embryo is conceived to before a woman gives birth. Some causes of vaginal bleeding or spotting are serious, such as possibly indicating a miscarriage or a problem with the location of the placenta, while others are not.

Although vaginal bleeding is not that unusual a symptom, especially in the first 12 weeks of pregnancy, it's a symptom that a woman should not ignore, said Dr. Haywood Brown, chief of obstetrics and gynecology at Duke University School of Medicine in Durham, North Carolina. She should notify her health care provider immediately about bleeding to obtain guidance, he recommended.

"Bleeding in early pregnancy is fairly common and occurs in about 20 to 30 percent of pregnancies during the first trimester," Brown said. "Some pregnancies in which bleeding occurs continue on to have normal outcomes," he noted.

Here are the differences between bleeding and spotting, some possible causes and what to do when bleeding occurs.

Spotting differs from bleeding both in terms of the amount of blood seen and its appearance.

Spotting during pregnancy is when a few drops of blood soil a woman's underpants, Brown said. Blood flow is light and there is not enough of it to cover a panty liner.

Spotting may typically occur in the early first trimester of pregnancy, Brown said. It can be a sign of a "threatened miscarriage," he said, which is why a woman should call her health care provider right away, who may then request an ultrasound to determine if the pregnancy is a viable one.

In comparison, bleeding during pregnancy involves a heavier flow of blood, an amount that if a woman weren't wearing a panty liner or pad, the blood would soak her clothes.

When contacting a health care provider, a pregnant woman should be able to describe when her bleeding began, the color of the blood she observes, such as dark red or light brown, and how frequently she is bleeding.

A woman may be asked whether her blood flow is getting heavier or lighter, and if she has seen clots or clumps of tissue passed from the vagina. Other questions may include how frequently a woman needs to change sanitary pads while she is bleeding and whether she has pain with bleeding, according to the March of Dimes.

Even if bleeding stops, a pregnant woman should still call her health care provider to understand why it occurred.

If bleeding is heavy or if bleeding is accompanied by pain or cramping, a pregnant woman should call her health care provider immediately or go to the nearest emergency room for evaluation, according to the March of Dimes. A woman should also seek emergency medical attention if she experiences dizziness while bleeding or feels pain in the abdomen or pelvis.

Causes of bleeding in early pregnancy

A woman may experience bleeding during the first trimester for the following reasons:

Implantation bleeding. Some women get "implantation bleeding," during the first four weeks after conception. This light bleeding may occur when the fertilized egg (embryo) attaches to the lining of the uterus and begins to grow, Brown said.

Having sex. When a woman is pregnant, bleeding of the cervix, which is the lower part of the uterus, may occur during sex, according to the American College of Obstetricians and Gynecologists (ACOG).

Infection. A vaginal infection as well as an infection of the cervix known as cervicitis can both cause spotting or bleeding, Brown said.

Ectopic pregnancy. Bleeding or spotting in early pregnancy could be a sign that the fertilized egg is not developing in the uterus and is growing somewhere else, most often in one of the fallopian tubes, Brown told Live Science. This is referred to as an ectopic pregnancy or a tubal pregnancy, he said.

A pregnancy that occurs outside the uterus is a medical emergency, Brown said. When bleeding occurs early in pregnancy, a woman's medical provider will attempt to rule out that an ectopic pregnancy is the cause. This will involve performing an ultrasound to see where the embryo is growing. A blood test may also be done to check levels of human chorionic gonadotropin (hCG), a hormone that's only present when a woman is pregnant. Levels of hCG may rise more slowly in an ectopic pregnancy than during a normal uterine pregnancy.

Miscarriage. Almost all women who experience a pregnancy loss have bleeding or spotting before the miscarriage, according to the March of Dimes.

Molar pregnancy. This rare condition, also called a hydatidiform mole, is when tissue that would normally develop into the placenta instead forms an abnormal growth or tumor in the uterus, according to the March of Dimes. A molar pregnancy may cause symptoms such as seeing bright red or dark brown vaginal bleeding during the first trimester, severe nausea and vomiting, and sometimes the passage of grape-like cysts through the vagina, says the Mayo Clinic. A woman who has these symptoms should call her health professional right away or go immediately to the emergency room for a prompt evaluation.

Causes of bleeding in late pregnancy

Cervical growths. Light bleeding in late pregnancy may be caused by an inflamed cervix or growths on the cervix, according to ACOG.

Hemorrhoids. As a woman gains weight during pregnancy, hemorrhoids may develop. These are swollen veins in the rectum or anus that can sometimes rupture and cause bleeding. But hemorrhoids would not cause vaginal bleeding. Instead, a woman might see blood in the toilet bowl after a bowel movement or on toilet paper after wiping.

Placental abruption. Heavier bleeding later in pregnancy, with blood flow comparable to a woman having her period, may indicate problems with the location of the placenta, Brown said. One common problem is a placental abruption, which is when the placenta becomes detached from the uterine wall and supplies the fetus with less oxygen. This is a serious condition that usually occurs in the third trimester, and it requires immediate medical attention.

Placenta previa. Another reason a woman may experience vaginal bleeding, typically without any pain, is placenta previa, Brown said. This pregnancy complication is when the placenta lies too low in the uterus, and it partly or completely covers the opening to a woman's cervix, he explained.

Bleeding during pregnancy can be evaluated by various tests as well as a pelvic examination. In addition to the possibility of pregnancy loss, a pelvic exam can help a health care provider rule out other potential causes of bleeding or spotting, such as infections, cervical trauma or cervical polyps (growths on the cervix that are usually not cancerous), Brown said.

One test given may be an ultrasound, a scan that uses sound waves to generate a black-and-white image of the developing fetus and placenta. Ultrasound can help detect a possible cause of a woman's bleeding, such as a fertilized egg developing outside the uterus (ectopic pregnancy), complications with the location of the placenta (placental abruption) or possible miscarriage, according to the March of Dimes.

Some women may receive a blood test to measure levels of human chorionic gonadotropin (hCG). A blood test may also check whether a woman needs treatment for Rh sensitization, a blood incompatibility between the mother and the fetus.