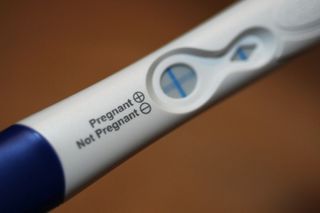 The fourth week of pregnancy is when you will see positive results on a pregnancy test.
(Image: © Hadi Djunaedi | Shutterstock)

During the fourth week of your pregnancy (measured from the first day of your last period), you may begin to have positive results on a home pregnancy test. For the sake of accuracy, it's best to wait until the end of the first week after a missed period to take the test, according to the U.S. Department of Health and Human Service's Office on Women's Health.

If the test comes back positive, congratulations! You should make an appointment to see your health care provider to confirm your pregnancy with a blood test and arrange a prenatal checkup. If the results are negative, take another test at five weeks because you may have taken the test too early for it to show a positive result.

Home pregnancy tests measure the amount of human chorionic gonadotropin (hCG) in your urine, a hormone that is produced by the placenta when a woman is pregnant. The hormone begins to appear shortly after the embryo attaches to the lining of the uterus, and hCG levels increase rapidly in early pregnancy.

Most practitioners don't see pregnant women until they are eight weeks along, so you may need to wait a few weeks before actually seeing your health care provider. However, if you have had a high-risk pregnancy or a history of problems in giving birth, you should see a health care provider sooner than that.

At this early stage in the pregnancy, there typically won't be any major outward changes in your body, though your basal body temperature — your temperature first thing in the morning — will be higher than usual. You may experience some mild uterine cramping. Some women will notice a small amount of spotting or vaginal bleeding, caused by the fertilized egg attaching to the uterine lining, according to the Mayo Clinic. This is called implantation bleeding, and light bleeding or spotting is normal.

A woman may experience some pregnancy symptoms at this point, including fatigue and exhaustion, which may be linked to rising levels of the hormone progesterone during the first trimester, according to the Mayo Clinic. Rising hormone levels can also increase the blood flow to your breasts, causing them to feel tender and sore during early pregnancy. In addition, elevated hormone levels can increase blood flow to your pelvic region, causing the need to urinate more frequently.

The rapidly rising levels of estrogen could even cause a heightened sense of smell. An increased sensitivity to smells and odor could contribute to the nausea and vomiting known as "morning sickness," which may begin between the second and eighth weeks of pregnancy. You may start craving certain foods, and foods that you previously enjoyed might start to taste different.

By the fourth week of pregnancy, a woman may gain one pound in weight.

At four weeks, the blastocyst — a tiny group of embryonic cells — would have already made the journey from your fallopian tube into your uterus and implanted in the uterine lining. After the fertilized egg implants, some of the cells will develop into an embryo and other cells will form the placenta, which will provide nutrients and oxygen to the developing embryo. A sac filled with fluid surrounds the embryo, called the amniotic sac, to help cushion and protect it.

At this point and throughout the pregnancy, you should avoid alcohol, recreational drugs and smoking, substances that may affect fetal development. Certain medications should also be avoided — ask your health care provider to make sure that none of the medications you are taking may be harmful to the fetus.

Limit your consumption of caffeine to 200 milligrams a day — about one 12-ounce cup of regular coffee, recommends the March of Dimes.

At least one month before becoming pregnant, women should begin taking a daily multivitamin containing at least 400 micrograms of folic acid, a B vitamin that is important in helping to prevent certain birth defects, advises the American College of Obstetricians and Gynecologists.

When a woman knows she is pregnant, her health care provider will prescribe a daily prenatal vitamin that has 600 micrograms of folic acid in it. It is hard to get this amount of folic acid from foods alone.

Taking folic acid before becoming pregnant and during early pregnancy may help to reduce a baby's risk for birth defects of the brain and spine, according to the March of Dimes.

Besides folic acid, a prenatal vitamin will also supply additional amounts of calcium, iron and vitamin D, three nutrients that are important for the healthy development of your baby. In addition to taking a prenatal vitamin, calcium should also be obtained from foods, such as yogurt, milk, cheese and some leafy green vegetables. Pregnant women should also include more Iron-rich foods in their diet, such as chicken, meat, fish, beans and iron-fortified cereals, as well as good sources of vitamin D, such as salmon and milk.