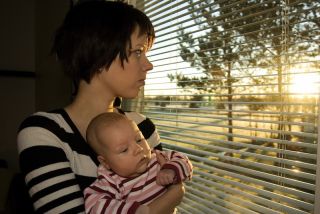 Mothers who believe in an intensive style of parenting are less happy, according to research released June 30 in the Journal of Child and Family Studies.
(Image: © Mika Heittola, Shutterstock)

Whether parenthood makes a person happy or not may depend on their attitude toward proper childrearing, new research suggests.

Moms who take an "intensive" approach, marked by the belief that mothers are the most important people in baby's life and that parents should always put their child's needs first, are less likely to be satisfied with their lives and more likely to be stressed than more laid-back moms.

"There's something very appealing about these intensive parenting ideologies," said study researcher Miriam Liss, a psychologist at the University of Mary Washington in Virginia. "[These attitudes] seem like they are how we should be feeling toward our children. But they may be more problematic than we think."

Intensive parenting is a style with three main philosophies: That mothers are the best possible people to care for their children, that mothering should center around the child's needs, and that children should be considered delightful and wholly fulfilling for parents.

Plenty of interview-based studies have found that many parents hold these attitudes, Liss told LiveScience, but there is a lack of hard data on the mental health effects. She and her colleagues recruited 181 moms of kids under age 5 to complete a series of online questionnaires about their parenting attitudes, family support, life satisfaction and mental health.

The researchers asked the moms how strongly they agreed with the beliefs within the philosophies of intensive parents: That moms are primary, that kids are entirely fulfilling, that children need lots of stimulation, that parenting is very challenging and that parents' lives should revolve around their children. [10 Scientific Tips for Raising Happy Kids]

The results revealed that three of the five pinnacles of intensive parenting are linked with nasty mental health effects. Though relatively few women held the belief that mothers are more important than anyone else in a child's life, even fathers, those who did hold the attitude were less satisfied with life, more stressed and felt less family support than other moms in the study.

The belief that parenting is a great challenge was also linked less life satisfaction, as well as more depression and stress.

"That one is a strongly held belief," Liss said. "Parenting being really, really hard is a commonly held belief that seems to be really bad for women."

Women who believed that parenting should be child-centered also had reduced life satisfaction, Liss and her colleagues reported online June 30 in the Journal of Child and Family Studies. That link disappeared when the researchers controlled for perceptions of family support, however.

The findings could hint at why research has come up with contradictory results about whether parenthood makes people happier or not. Some studies have found that parenting increases stress and decreases well-being, while others have found no effect or a positive influence on happiness.

The researchers can't say for sure whether the parenting causes the mental health problems, though many of the links make little sense the other way around, Liss noted.

There's little long-term data on whether intensive parenting is good or bad for kids, but plenty of research has shown that having a stressed or depressed mom is tough on children, Liss said.

"We can say that anything that causes more maternal depression is not good for kids," she said.

Some of the ideologies of intensive parents, such as the idea that only mom can make her kids thrive, are appealing on their surface, Liss said. But the flip side seems to be a strain on parents that helps no one.

"This is part of the culture of pressure that moms and dads, but mostly moms, find themselves living under," Liss said. "And we as a culture should probably ease up a little bit on some of the pressure to be these intensive, child-centered parents."