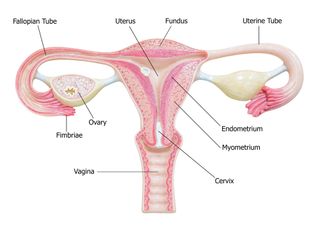 Ovaries are the female gonads — the primary female reproductive organs. These glands have three important functions: they secrete hormones, they protect the eggs a female is born with and they release eggs for possible fertilization.

Human females are typically born with two ovaries stemming from the uterus. Before puberty, ovaries are just long bundles of tissue. As the female matures, so do her ovaries. When mature, ovaries are about the size of a large grape, according to EndocrineWeb.

The ovaries lie on either side of the uterus against the pelvic wall in a region called the ovarian fossa. They are held in place by ligaments attached to the uterus.

The ovaries have three functions. First, they shelter and protect the eggs a female is born with until they are ready for use. It is thought that women are born with their lifetime supply of eggs, but a study by the University of Edinburgh's School of Biological Sciences found that chemotherapy might spark the development of new eggs.

"This study involves only a few patients, but its findings were consistent and its outcome may be significant and far-reaching," study researcher Evelyn Telfer, a professor at the University of Edinburgh's School of Biological Sciences, said in a statement. "We need to know more about how this drug combination acts on the ovaries, and the implications of this." [Can a Chemotherapy Drug 'Turn Back the Clock' in Women's Ovaries?]

Second, ovaries produce female reproductive hormones called estrogen and progesterone, and some lesser hormones called relaxin and inhibin. There are three different types of estrogen: estrone, estradiol and estriol. They are used by the body to help develop adult female characteristics, such as breasts and larger hips, and to aid in the reproduction cycle. Progesterone is also key to reproduction (more on that later). Relaxin loosens the pelvic ligaments so they can stretch during labor. Inhibin prevents the pituitary gland from producing hormones.

Third, ovaries release one egg, or sometimes more, each menstrual cycle. This process is called ovulation. Inside each ovary, there are follicles and inside of each follicle is a dormant egg. When a female is born, she has around 150,000 to 500,000 follicles in her ovaries. By the time she is sexually mature, the female will have around 34,000 follicles, according to the Encyclopedia Britannica.

When a particular egg is stimulated to maturity by hormones released from the pituitary gland, the follicle migrates to the ovary wall. Here, the egg and the follicle grow and mature. When mature, they are ready for ovulation. Mature follicles, called Graafian follicles, can grow up to about 1.2 inches (30 millimeters) in diameter.

The follicle with the mature egg ruptures, releasing the egg into the nearest fallopian tube. From there, the egg travels to the uterus. The body produces the hormone progesterone to make the lining of the uterus thicker to be receptive to the incoming egg. This hormone is made by new cells growing where the old egg once was in the ovary. These cells are called the corpus luteum and act as temporary glands.

If there is no sperm, or if the egg just doesn't get fertilized, the body stops making progesterone around nine days after ovulation. Then the egg is flushed from the uterus during menstruation. Each menstrual cycle is around 28 days.

If the egg is fertilized, the corpus luteum — and then the placenta of the fetus — keeps producing progesterone. Not only does this hormone keep the uterus a hospitable environment for a growing egg, it also prevents the ovaries from releasing more eggs.

Occasionally, stress or other factors will prevent ovulation. When this happens, it is called a anovulatory cycle.

Most ovarian problems are caused by cysts. Ovarian cysts, growths on the ovaries, are common and most women will get them at least once, according to the Mayo Clinic. Most women don't even know when they have one because typically they are not painful or anything to worry about.

Polycystic ovary syndrome (PCOS) is an ailment defined by multiple cysts growing on the outer edge of the ovaries due to a lack of hormones that allow an egg to be released from the follicle. This disorder can lead to infertility and other serious complications such as heart disease, diabetes or stroke.

Sometimes a cyst will become cancerous. One in 75 women will develop ovarian cancer, according to the American Cancer Society. There are current tests that can help detect a woman's likelihood of developing ovarian cancer. In some cases, women choose to remove their ovaries as a precautionary measure.

"If you have your ovaries removed due to certain hereditary cancer screening results such as BRCA, then we also remove your fallopian tubes because you can also get cancer from your fallopian tubes," said Dr. Sarah Yamaguchi, an OB/GYN at Good Samaritan Hospital in Los Angeles, California. "However, even with that done, you can still get primary peritoneal cancer which is very similar to ovarian cancer."