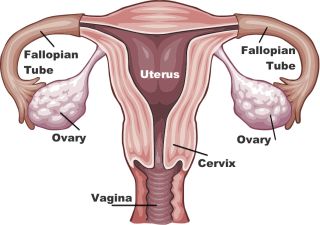 Ovarian cysts are sacs of fluid that can grow on the ovaries. They are very common; most women will get them at least once some time in their lives, according to the Mayo Clinic. For the most part, ovarian cysts are not life threatening or even bothersome. Some women do experience more advanced cases that require medical treatment.

According to the U.S. National Library of Medicine (NLM), women that are between puberty and menopause are most likely to develop ovarian cysts. There are several kinds of cysts that can form on the ovaries during this time in life.

The most common is a functional cyst. The ovaries grow structures called follicles, where immature eggs develop. If the follicle doesn’t open up and release the egg, it fills with fluid and causes a cyst. This is one type of functional cyst called a follicular cyst. If the cysts forms after the egg is released it is called a corpus luteum cyst.

Polycystic ovary syndrome (PCOS) is when the body doesn’t produce enough hormones for the follicle to release the egg, causing follicular cysts. PCOS disrupts the normal production of hormones, which can cause various problems.

Other cysts develop from tissue and cells. Some are created with ovarian tissue filled with a watery liquid or a mucous material. These types of cysts are called cystadenomas. Dermoid cysts are ovarian cysts that can contain hair, skin or teeth. These unusual additions are caused by cells that produce human eggs, according to the Mayo Clinic. Endometriomas are cysts caused by uterine endometrial cells growing outside the uterus and attaching to the ovary to form a growth.

Sometimes cysts can be caused by outside factors. For example, fertility drugs can cause multiple, large cysts on the ovaries. This condition is called ovarian hyperstimulation syndrome.

Many women with ovarian cysts don’t experience any symptoms. This is particularly true with functional cysts. Symptoms usually occur when something goes wrong. For example, a cyst may grow larger, start bleeding, break open, twist the fallopian tube or interfere with the blood supply to the ovary, according to NLM. Some symptoms are also caused when a cyst is bumped during sexual intercourse.

Possible symptoms can include a sensation of pelvic fullness because a cyst is pressing on the bladder, pelvic tenderness or pain in the right or left side of the lower abdomen that can radiate to the back and down to the legs, pain while defecating, breast tenderness, changes in the menstrual cycle, such as spotting or bleeding at times other than when menses is expected and difficulty emptying the bladder.

Women experiencing ovarian cysts may also have problems eating. Getting full quickly when eating, loss of appetite and losing weight without trying most days for at least two weeks may be a sign of a cyst, according to NLM.

It is important to be aware of the symptoms of ovarian cysts because some symptoms are an indication that immediate medical attention is needed. “If you experience sudden, severe abdominal or pelvic pain, nausea or vomiting, or a fever, seek immediate medical attention, as this may be a sign of a more serious problem,” Dr. Leigh Matlaga, an OB/GYN at MedStar Franklin Square Medical Center.

Most cysts clear up on their own without the need for treatment in eight to 12 weeks, according to NLM. “However,” said Dr. Antonella Lavelanet, an obstetrician at Boston Medical Center, “cysts that grow larger than 5 centimeters are at greater risk for torsion (twisting around the Fallopian tube). Torsion is a gynecologic emergency. Women with ovarian torsion present with sudden onset of abdominal pain, often associated with nausea and possibly vomiting and low-grade fever.”

Early monitoring is key to finding ovarian cysts before they become a problem. “All women should visit their gynecologist regularly,” said Matlaga. “Routine pelvic exams can detect ovarian cysts, or any other changes in your ovaries, as early as possible. It is important to pay attention to your body and report any changes in your monthly cycle to your doctor.”

Doctors will often check for cysts using ultrasound, but other imaging devices, such as CT scans or MRI may also be used. Blood tests may also be performed to search for changes in hormone levels, signs of pregnancy and possible cancer. Once a cyst is confirmed, larger, cancerous or persistent cysts may be removed surgically. If the woman is near menopause the cysts may also be removed.

Some women are more prone to developing cysts. In these cases, a medical professional will often prescribe birth control that contains estrogen to help reduce the risk of developing certain types of functional cysts that occur after ovulation.

Women are often worried that cysts may affect their fertility. In general, fertility is not affected by functional cysts. “However, if cysts become too large and need to be removed surgically, there is always the risk that the ovarian tissue will be compromised or the ovary will be removed in its entirety,” said Lavelanet. As long as the other ovary is intact and functioning properly, a woman is usually able to go on to have children.