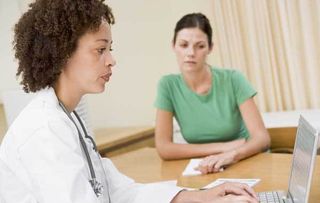 Uterine fibroids, clinically known as uterine leiomyomata, are common, non-cancerous growths of the walls of the uterus. These fibroids are made up of groups of muscle cells and other tissues, and can range in size from as small as a pea to as large as 5 to 6 inches (12.7 to 15.24 centimeters) wide.

Research suggests that as many as 70 to 80 percent of women will develop fibroids by the time they reach age 50, according to the OWH. However, it's hard to say exactly how many women have them because many women have no symptoms at all.

A 2003 study by D.D. Baird, et al., published in the American Journal of Obstetrics and Gynecology found that out of a group of more than 1,000 U.S. women ages 35 and 49, fibroids become more common with age, with 35 percent of women developing fibroids before menopause. The study found that for those who had developed fibroids by age 50 the percentage jumped to 70 percent for white women and 80 percent for black women.

While fibroids are almost always benign, cancerous fibroids do occur in rare cases (less than one in 1,000), according to the OWH. Having a benign fibroid does not increase the risk of developing a cancerous fibroid or other cancers of the uterus, the office says.

The exact cause of uterine fibroids is not known, but it's thought that hormones made in the ovaries— such as estrogen (especially estradiol) and progesterone — and a person's genes play a role in their development, according to the OWH. Researchers think the growth is influenced by ovarian hormones, since fibroids rarely occur before a woman starts having periods, and they usually grow during pregnancy and shrink after menopause.

Dr. Kevin Audlin of Mercy Medical Center in Baltimore suggests that dietary changes can potentially slow down the growth of fibroids. Foods that are high in estrogen related sterols — such as soy products, red meats, and green leafy vegetables — can contribute to the grown of fibroids. Cutting these food products out of one's diet won't stop or prevent the growth of fibroids, but it could help slow down the process. There is still a great deal of research in this area.

Many women don't have any symptoms, but when they do, they can often be in conjunction with other causes, according to Dr. Malcolm Munro of Kaiser Permanente in Los Angeles. Submucosal fibroids may alter the ability of the uterus to control menstrual bleeding, which can lead to prolonged and/or heavy periods, potentially with clots than can cause cramps. However, they typically don't cause pain or extra bleeding in between periods. Submucosal fibroids can also lead to infertility or miscarriages early in a pregnancy.

Intramural and subserosal fibroids typically don't lead to heavy periods. However, they can grow to the point that they can lead to chronic pressure, frequent urination, difficulty with bowel function, lower back pain, general aching in the pelvis, pain during sex, and they can even make clothing feel tighter.

Fibroids can also lead to anemia, fatigue (from the anemia), and if twisted, can result in the blockage of blood vessels and nerves, leading to acute and severe pain, according to the National Institutes of Health.

Fibroids are often discovered during routine pelvic exams, when the doctor checks the uterus, ovaries and vagina. However, they can often be missed, according to Munro, especially if the patient is obese or if the fibroid is submucosal. The submucosal fibroids cannot be felt due to their location, which can lead to a misdiagnosis, especially other types of fibroids such as subserosal fibroids, were found.

To confirm the presence of fibroids, imaging tests may be done, including:

Women with uterine fibroids, especially those that are intramural and subserosal, typically have normal pregnancies, but the condition does increase the risk of pregnancy complications. These include: preterm delivery, a baby in the breech position (not positioned well for delivery), and an increased risk of needing a C-section. Some pregnant women will experience localized pain during the first and second trimester, according to the Mayo Clinic.

Most women with fibroids don't have symptoms, so they may not need treatment. The size and location of the fibroids, a woman's age, and whether a woman wants to become pregnant in the future, can all factor into the decision to treat fibroids, and which treatment to she chooses. Typically, fibroids shrink on their own after menopause, according to the Office on Women's Health.

Fibroid-related symptoms can be controlled through medication, surgery or other nonsurgical procedures.

Birth control pills or other forms of hormonal birth control may be used to control heavy bleeding and painful periods, according to the American Congress of Obstetricians and Gynecologists. A medication called "tranexamic acid" is an effective non-hormonal way to treat heavy periods and is only taken during the period, Munro said. Gonadotropin releasing hormone agonists (GnRHa), such as those under the trade name Lupron and Synarel, can provide temporary relief by shrinking the fibroids and controlling heavy bleeding. Lupron, for example, starves the fibroids of estrogen and can shrink them about 20 to 30 percent over a three-month period, Audlin told Live Science.

However, these are not permanent solutions and don't deal with issue of pregnancy or recurrent pregnancy loss related to submucosal fibroids. Long-term use of GnRHas can cause bone thinning, and their use is generally limited to six months or less unless ovarian hormones are "added back" into the system, according to the OWH. Munro said newer medications, called progesterone receptor modulators, are available in many parts of the world, with the first in the United States to be approved within a year. These new drugs can be taken long term or intermittently without any problems associated with GnRHa.

For women who choose not to become pregnant in the future, the symptom of excessive bleeding can be treated with endometrial ablation, in which a hysteroscope or other device that uses heat, microwave energy, hot water or an electric current sloughs off the endometrial lining of the uterus. However, the procedure will not alleviate symptoms caused by large intramural or subserosal fibroids.

Surgery may the best treatment option for women with moderate to severe symptoms. A total hysterectomy — the complete removal of the uterus (and leaves the ovaries in place) — is, so far, the only proven permanent solution for uterine fibroids, according to the Mayo Clinic. In fact, one of the three most common reasons why hysterectomy is performed is uterine fibroids, according to the Centers for Disease Control and Prevention. The procedure eliminates the ability to bear children.

A surgical option called myomectomy removes the fibroids without removing the healthy part of the uterus. While this procedure is preferable for women who still wish to bear children, there will be a risk of fibroid reoccurrence, according to the OWH. There are three basic ways in which the surgery can be performed: using a hysteroscope, abdominally via laparoscopy, or abdominally through a larger incision, said Munro. Hysteroscopic and laparoscopic removal are considered to be minimally invasive surgeries. The decision as to which surgery is needed depends on several factors based on the size, number, and type of fibroids (based on their location).

Submucosal fibroids are almost always treated with hysteroscopic myomectomy, Munro said. There are no incisions, and the procedure is typically performed in an office setting or an outpatient operating room. Subserosal and intramural fibroids require an abdominal incision, with the choice of laparoscopy or laparotomy being based on the size and number of the fibroids as well as the ability of the surgeon.

Another minimally invasive option is uterine artery embolization. During the procedure, a thin, image-guided catheter the size of a spaghetti noodle is inserted into the arteries that feed into the uterus. Small plastic or gel particles are then injected into the catheter to block the blood supply to the fibroid, causing it to shrink. The procedure is most suitable for women who choose not to become pregnant in the future, who have fibroids that cause chronic pain, compression of the bladder or rectum, or who experience significant bleeding and who have fibroids that are not treatable by hysteroscopy, according to the University of Maryland.

Another image-guided treatment option is leiomyoma ablation, which uses an electric current or focused ultrasound energy to destroy the fibroids and shrink the blood vessels around them. According to Audlin, these techniques can shrink the fibroids by about 30 percent. Currently, the electrical current technique requires laparoscopy in an operating room and the focused ultrasound requires a special MRI machine. However, the safety, effectiveness, and risk of recurrence of these procedures for women who choose to preserve or improve fertility are still unclear, according the Mayo Clinic.

There are currently no safe treatment options for pregnant women, according to Audlin. In addition to miscarriages, fibroids can also lead to additional pregnancy pain and post-partum hemorrhage (heavy bleeding) that may lead to transfusions or even hysterectomy.