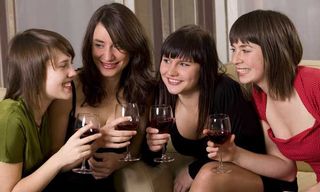 About half of pregnant women in the United States drink alcohol around the time they become pregnant or in early pregnancy, usually before they know they are expecting, a new study suggests.

The study involved more than 5,000 women who were surveyed by telephone when they were about six weeks pregnant, and again when they were around three months pregnant. During the second interview, the women answered questions about their alcohol use, including how much they drank, and how frequently. About 70 percent of the women said they had a planned pregnancy.

However, nearly all of the woman said they stopped drinking at around four weeks of pregnancy. This is around the time that many of these women would have taken a pregnancy test and discovered they were pregnant, the researchers said. The women who had planned pregnancies tended to stop drinking around the same time as women with unplanned pregnancies, the study found.

"Our data suggest that the majority of women, regardless of pregnancy intention, stop or decrease alcohol use around the time of a positive pregnancy test," the researchers, from Vanderbilt University Medical Center in Nashville, Tennessee, wrote in the April issue of the journal Obstetrics & Gynecology. [7 Ways Alcohol Affects Your Health]

In 2016, the Centers for Disease Control and Prevention advised women who were planning to become pregnant, as well as women who were merely sexually active and not using birth control, to abstain from alcohol use. This recommendation was met with criticism from the public and health care providers, who saw the recommendations as patronizing, the researchers said.

The new findings suggest that a better alternative to advising complete abstinence from alcohol for all women who could potentially become pregnant might be to encourage prompt pregnancy testing to recognize pregnancy earlier, the researchers said. Whereas the former strategy seems unlikely to be achieved, the latter "results in relatively prompt reductions in alcohol consumption," they said.

Women who had planned to become pregnant were 31 percent less likely to have consumed alcohol in the past four months, compared with women who had an unplanned pregnancy.

The researchers noted that pregnant women who were white, college-educated, relatively older and had higher incomes were the most likely to consume alcohol in pregnancy, compared with other demographic groups.

These women might be overlooked as being at risk for alcohol consumption during pregnancy "because they defy clinical and cultural biases about who may be most likely to drink during pregnancy," the researchers said. Thus, doctors should evaluate all pregnant women for risky behaviors such as drinking, they said.