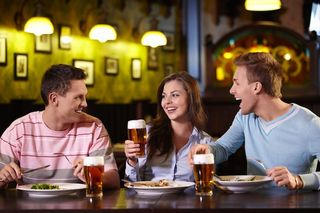 Many people have been there: After a night of one too many martinis, you wake up with a pounding headache and crippling nausea. The hangover has plagued mankind since drinking began, with records of the phenomenon dating back to ancient Egypt.

Despite the hangover's long history, its exact causes are still being parsed out.

"The question is: What's causing the hangover?" said Dr. Robert Swift, a professor of psychiatry and human behavior at Brown University who studies alcoholism. "It could be the alcohol, it could be how it's drunk, it could be the other substances along with the alcohol."

But in any case, "a hangover is a clear indication that you've done something that's not very smart," said James Schaefer, an anthropologist at Union College who specializes in alcohol metabolism research. "It's a warning signal."

While many people have received that warning, there are a number of facts about these dreaded post-imbibing episodes that are not widely known.

Here's a look at 11 things you should know about hangovers:

Not only are cigarettes bad for your overall health, they can make your hangover that much worse the next morning.

Researchers who looked at the smoking and drinking habits of college students found that those who smoked on the nights that they drank heavily had much more severe hangovers the following day.

While the exact reason for this is still unknown, researchers surmise it may be because smoking can cause people to drink more, according to a 2005 study in the journal Drug and Alcohol Dependence. This leads to more severe symptoms the next day. Another idea is that chemicals in cigarettes can heighten the overall pharmacological effects of alcohol.

While hangovers can take a toll on individuals, they can also affect the economy. It's estimated that hangovers cost $148 billion annually, with an average annual cost of $2,000 per working adult, due to missing work and poor job performance, according to a 2000 study in the journal Annals of Internal Medicine.

In fact, even though a person's blood alcohol content may be back to zero the day after imbibing, research has established that hungover workers have an increased risk of accidents and injury. The more severe the hangover,  research finds, the greater the neurocognitive deficits, including poorer reaction times, memory and attention span.

Darker-hued drinks, such as bourbon, red wine and rum can often be the culprit of a brutal hangover, thanks to high concentrations of compounds called congeners. These byproducts of fermentation get metabolized by the body into formaldehyde, a highly toxic substance that can contribute to a person's overall misery during a hungover morning.

In a study comparing the effects of drinking bourbon with  drinking vodka, those people who drank bourbon felt worse the next day.

"The clear, the five-times-distilled vodka is better than thick, goopy rum," Schaefer said. "The darker the liquor, the more congeners it has."

But, if a peaty, single-malt scotch is your drink of choice, "drink it neat and chase it with water," Schaefer advised.

Hangover symptoms are closely tied to how efficiently the body breaks down alcohol and its byproducts. Certain genes are directly responsible for key enzymes, such as aldehyde dehydrogenase, which breaks down the toxic alcohol byproduct acetaldehyde.

A large percentage of Asians don't have enough of this enzyme, which can cause a heightened negative response to alcohol, according to an article in the International Journal of Environmental Research and Public Health.

On the other side of the spectrum, studies have found that roughly 25 to 30 percent of the population seems to be resistant to hangovers, which is likely due to "a very effective ethanol metabolism," Schaefer said.

You may be going through withdrawal

The shakiness, sweating and sensitivity to light and sound that can accompany a hangover are also symptoms of withdrawal. "There is a theory that hangover is a type of withdrawal from heavy drinking," Swift said. "This puts your brain in a supersensitive state — lights are lighter, and sounds are louder."

Along with this supersensitivity, the body is battling an overload of acetaldehyde, the toxic byproduct of alcohol breakdown that contributes heavily to the misery of overdrinking.

Some people deal with the pain by a "hair of the dog" remedy, which involves drinking more alcohol in the morning to ease the pain of a hangover.

However, in reality, this simply increases the amount of alcohol in the blood. "Getting drunk all over again masks the hangover," Schaefer said. "It's both foolish and risky with respect to developing dependency."

Snacking on protein can help

Because they take a relatively long time to digest, protein-rich foods such as meat, nuts and cheese will delay the opening of the pyloric valve, which allows the stomach's contents to pass into the small intestine. The small intestine is where most alcohol is absorbed into the blood.

If you can't find a protein-rich snack, make sure you eat something else. "Eating food of any sort keeps the stomach busy," Schaefer said. "And, food will absorb and dilute the alcohol that's poured into the stomach."

Beer and champagne drinkers take note — the bubbles in your beverage can contribute to a hangover's severity.

"If you drink bubbly drinks, [the gas] causes your pyloric valve to open," Schaefer said.

Thus, bubbly alcohol is more likely to quickly reach the small intestine, from where it is swiftly taken up into the bloodstream. Higher blood alcohol content is more likely to lead to intense hangover symptoms in the morning, so, Schaefer advised drinking "alcohol on the rocks with water as a chaser."

Your brain is dehydrated

That signature, pounding headache of an epic hangover is due to dehydration. Specifically, "ethanol dries out your brain," Schaefer said.

In fact, during heavy drinking, "the amount of fluid you lose can be more than the fluid you consume," Swift said. The brain loses much of this water, making it literally shrink, and causing the splitting pain in your head.

Women have a higher risk of hangovers than men

The body's water content is to blame for a woman's more potent hangover. While all humans are roughly 80 percent water, this varies between the sexes. As a percentage, women have less body water due the fact that they have more body fat (which holds less water) while men have more muscle (which is made up mostly of water).

"When a man and a woman who weigh exactly the same drink the same amount of alcohol, the woman will always have a higher blood alcohol content because there's less water to dilute it," Swift said.

Inflammation is a key culprit

Inflammation adds to the complexity of a hangover's causes. Alcohol releases inflammatory molecules from the liver, known as cytokines.

"Cytokines are what make you feel achy and feverish when you have the flu," Swift said. While no one knows exactly how alcohol enacts this process, Swift said that inflammation may be due to the large amounts of alcohol that our livers have to handle when we drink.

"We ingest alcohol at 10 times the concentration that you normally take other drugs," he said.

Additionally, because alcohol causes inflammation in our bodies no matter where it is (such as when poured on an open cut) Swift says it's natural that the liver would respond the same way, releasing those painful cytokines into our bloodstream as a result.