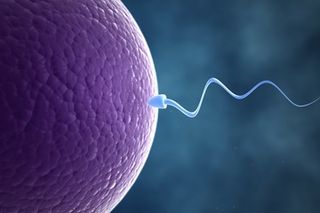 In many parts of the world, scientists and fertility doctors are noticing a drop in sperm count and sperm motility (sperm movement), which make it harder for couples to have babies.

A recent study in France, for example, estimated that for a 35-year-old man, sperm concentration dropped from 73.6 million per milliliter in January 1989 to 49.9 million/ml in December 2005. Here are some of the possible causes of this phenomenon:

Plastics: Bisphenol A (BPA), an additive to plastics found in many household products, can lower sperm counts and motility. A 2008 study in the journal Fertility and Sterility showed that men with high concentrations of BPA in their urine also had low sperm counts. Food packaging is a major source of BPA, which can seep into the food.

Sexually transmitted infections: Some experts point to the fact that bacterial infections such as gonorrhea can have an impact on the testicles, which in turn affects sperm production. When bacteria are present in the ejaculate, the body produces chemicals that can hinder sperm function.

Stress: Stress can decrease sexual function and interfere with the hormones needed to produce sperm. Research led by the Population Council  in 1997 found that stress hormones overpower the enzymes responsible for ensuring that cells in the testes produce testosterone, which is necessary for sperm formation.

Obesity: Animal studies have shown that embryo implantation and fetal development decreased when sperm came from obese fathers. And a study in France found that obese men were 42 percent more likely to have low sperm counts than non-obese men, and an 80 percent chance of having ejaculate with no sperm in it at all.

Pesticides: Scientists have noticed that men from rural areas where farming pesticides are common have lower sperm counts than men from urban areas. Agricultural runoff gets into tap water and can disrupt hormonal processes. This happens not just in grown men, but also in developing fetuses, which can carry the hormonal disruption with them for life.

Watching TV: A 2013 study from the British Journal of Sports Medicine found that men who watched 20 hours of TV or more per week had sperm counts that were 44 percent lower than those of men who didn't watch TV. Researchers believe this may be due to the sedentary nature of TV-watching, since the guys in the study who exercised 15 or more hours each week had sperm counts that were significantly higher than those of men who exercised fewer than 5 hours a week.