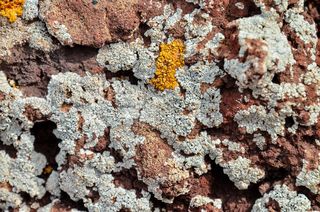 There isn't much that's sexy about lichen, the slow-growing fuzz found on rocks, walls and tree bark. But apparently not everyone agrees. Experts in New Zealand are warning men not to consume a type of lichen that's being touted as a "natural Viagra" and alternative treatment for erectile dysfunction (ED), according to news reports.

This type of lichen is known scientifically as Xanthoparmelia scabrosa, but it has been dubbed "sexy pavement lichen" due to its similarities with ED drugs, according to the New Zealand-based news outlet Newsroom. The lichen grows naturally on roads and pavements and is abundant in New Zealand. It contains a compound similar to the active ingredient in Viagra and other ED drugs, which is part of a class of drugs known as PDE5 inhibitors, Newsroom reported.

Thankfully, there have been no reports of anyone actually licking lichen off the pavement in the hopes of treating erectile dysfunction. But powder from ground up Xanthoparmelia scabrosa is being marketed as an ED treatment — for example, the Chinese e-commerce site Alibaba lists hundreds of varieties of lichen powder available for purchase, according to Newsweek.

But consuming Xanthoparmelia scabrosa in any form could be dangerous. The chemicals in the lichen could be toxic,  Allison Knight, a lichenologist at the University of Otago in New Zealand, told the Newsroom. What's more, in urban areas, this lichen can contain high levels of heavy metals, including copper, lead and zinc.

"I always say in my talks that I don't recommend going out and licking the footpath," Knight said.

In addition, if you buy Xanthoparmelia scabrosa powder, there's a chance it may not even contain natural lichen.

One analysis of a Xanthoparmelia scabrosa product found that it was 80% Viagra and 20% grass clippings, Newsroom reported.

Knight noted that growing vast amounts of this lichen for use in alternative medicine products would be difficult.

“Most lichens grow very slowly, just a few [millimeters] per year, so it would be scarcely sustainable to harvest them," Knight said.