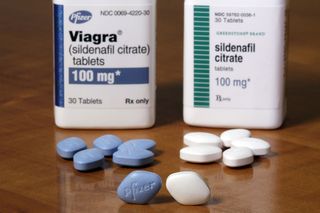 An image of Viagra (left) and Pfizer's the new generic version of the drug (right.)
(Image: © Richard Drew/AP/ Shutterstock)

A generic version of Viagra will be available on Monday (Dec. 11), and it will cost half the price of the "little blue pill."

Pfizer, which makes Viagra, will produce its own generic version of the drug, which contains the active ingredient sildenafil, according to the Associated Press. The generic will be white rather than blue, and it will cost around $32 a pill, half Viagra's price.

By selling its own generic version, Pfizer will be able to compete with other drug companies that can start selling sildenafil as soon as Monday, when Pfizer's patent on the drug expires, the AP said.

When researchers first created sildenafil in the 1980s, it was intended to be a treatment for angina, or chest pain caused by reduced blood flow to the heart, according to a 2004 review article.

However, in an early trial, the drug did not produce the heart effects the researchers had hoped for. But a number of study volunteers reported an interesting side effect — they had stronger and more persistent erections. Other studies conducted around the same time revealed that sildenafil's molecular target may play a role in erections. That spurred a new study of the drug for men with erectile dysfunction, which found that sildenafil was effective in 82 percent of men who received the highest study dose, according to the review.

The drug works by blocking an enzyme found in penile tissue.

On a molecular level, sildenafil inhibits an enzyme called phosphodiesterase 5 (PDE5), and prevents this enzyme from working too quickly, according to the U.S. National Library of Medicine. PDE5 is found in various tissues, including the penis. The enzyme plays a role in regulating blood flow to the penis, and by blocking the enzyme, sildenafil's overall effect is to increase blood flow to the penis, which leads to an erection.

Some men reportedly take the drug recreationally, under the belief that it will boost their sex drive. But sildenafil does not increase sexual desire, according to the National Institutes of Health (NIH). The drug also won't induce an erection by itself — it works only when a man is sexually stimulated, according to Pfizer.

It shouldn't be taken with certain medications.

Not all men with erectile dysfunction can take sildenafil. Those taking certain medications should not take the erectile dysfunction drug because of the risk of serious side effects, Pfizer says. For example, drugs called nitrates, which are often prescribed for chest pain, and drugs called guanylate cyclase stimulators, which are prescribed for pulmonary hypertension (a type of high blood pressure), could lead to an unsafe drop in blood pressure if taken with sildenafil, according to Pfizer.

Sildenafil is also approved to treat pulmonary arterial hypertension, which is high blood pressure in the vessels that carry blood to the lungs. The drug treats this condition by relaxing blood vessels in the lungs, which allows blood to flow more easily, according to the NIH. Sildenafil is even used to help premature babies with this condition. When used for this condition, sildenafil is sold under the brand name Revatio (also made by Pfizer).