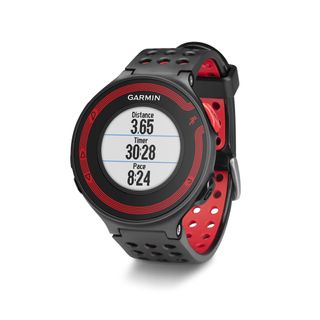 I enjoyed using the Forerunner 220, and I think experienced runners will appreciate the sheer amount of data it collects from each workout. For running newbies (or people who are just new to the world of wearable technology), it will also probably be motivating to see statistics attached to their training.

I did encounter some problems syncing the device to my computer and phone, but once the workouts were properly uploaded, I liked that the watch recorded detailed information about my route, elevation changes and cadence.

The Forerunner 220 is one of the only GPS watches with a color screen, which certainly sets it apart from other similar devices on the market. The colors are a nice touch, but I prefer to have a sharper LCD display (even if it's only in black-and-white), such as the one on the TomTom Multi-Sport GPS Watch. Still, the Forerunner 220's watch face is easy to read in light or dark settings because the watch has a backlight, which can be activated by pushing a button on the left side of the screen.

The watch is comfortable to wear, and feels no bulkier than a regular wristwatch. The adjustable rubber strap is breathable and light, and the device felt secure and snug on my arm. As far as watches for running go, the Forerunner 220 is pretty eye-catching (I even received a compliment on it during one of my training runs), but for the price of the watch, I wish Garmin offered more color options to choose from. [Video: How to Get the Most from Wearable Devices]

When I start testing a new device, I try not to look at the instruction manual for the first few days. This helps me judge how intuitive using the device really is — I like gadgets that are relatively easy to figure out on my own. I found it pretty easy to navigate through using the buttons on the Forerunner 220, however, I found the menus on TomTom's Multi-Sport GPS Watch even easier to scroll through and follow.

When I first started using the Forerunner 220, I was shocked by how quickly the watch picked up a satellite signal. In one case, it took mere seconds for the watch to acquire a satellite lock. The TomTom Multi-Sport GPS Watch was similarly quick to find a satellite signal, which I suppose shouldn't be too surprising, since TomTom and Garmin are some of the most well-known brands in GPS technology. Still, not having to wait around for your GPS watch to acquire a satellite lock — particularly if you're standing at the start line for a race — is always a big advantage.

The watch's basic functions were easy enough to figure out on the fly, but to take advantage of all the features, it's worth it to invest some time in learning how to customize the settings, and how to sync information between your watch and computer. You can, for instance, design training plans online on your computer, or on an iOS or Android smartphone or tablet, and then link your plans to your watch.

I appreciated the watch's lock-screen feature, and I imagine people who wear the Forerunner 220 even when they're not running will also find it handy, because it lets you wear the device simply as a watch, without draining its charge by running the GPS. When the screen is locked, pressing the "run button" on the top right three times will start the GPS tracker without the need to mess around with any settings.

The Forerunner 220 displays many standard running measures — such as your distance, pace and time — on the watch face itself, but you can see more detailed statistics and information about each run on a computer or mobile device. By syncing the watch to Garmin's free accompanying app, called Garmin Connect, I was able to see maps of my running routes, graphs of elevation changes, breakdowns of my pace and cadence (how often my feet touch the ground — represented as strides per minute). If you're training for a race — or even if you're just a casual runner — it can be extremely helpful to see these stats, because they can help you monitor your progress, or craft training plans to improve endurance or speed.

For indoor workouts on a track or treadmill, the Forerunner 220 also has a built-in accelerometer, so I was still able to use the watch when a cold, icy night made running out in the elements a bit too treacherous for my liking.

One of the things I liked about the Forerunner 220 is that each of your runs can be customized through the watch's own settings. For instance, if I want to incorporate intervals into a run, I can program the watch to vibrate at certain points, or after I've completed a certain number of laps, to indicate when I should speed up or slow down my pace. The watch also has alert tones that can be used for interval training, but the vibrating motor was particularly handy because I never had to worry about the sounds being drowned out by noisy traffic. These types of vibrating alerts have become popular for GPS running watches, but surprisingly, there are some devices on the market, such as the Nike+ Sportswatch GPS, that lack this feature.

The accompanying Garmin Connect app can be used for multiple Garmin devices, which I found helpful because I have also used the Garmin Vivofit fitness tracker. Having all my workout information in one place certainly cut down on the confusion of using multiple activity trackers to begin with. I did, however, encounter some issues when it came time to sync the Forerunner 220 to my computer and phone. I had more luck linking the device to my iPhone, but even still, it often took several tries before all the workout information was properly uploaded.

The Forerunner 220 was very comfortable to wear, and I looked forward to using it every time I stepped out for a run. The watch is waterproof to 50 meters, but it's definitely geared more to runners, so if you're a multi-sport athlete, it might be worth investing in a watch that can also track swimming and cycling.

The Forerunner 220 collects most of the standard measures that other GPS watches do, but I really liked the level of detail that I could retrieve about my runs once I synced the device to my phone or computer. In particular, the watch's ability to track cadence is a great — and very helpful — tool.

Editor’s Note: In February 2015, we changed the rating system we use in our health tech reviews from a 5-star system to a 10-point system. Not all of our ratings were a straight conversion (i.e. 2/5 stars = 4/10 points). Instead, we adjusted some of them in order to give our readers a better idea of how these devices perform in relation to each other.

More Reviews: See all our GPS watch reviews to find the best one for your needs.