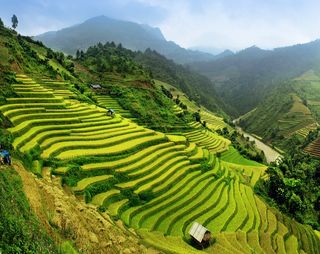 "This is almost as large as the global warming in the past 150 years," said Feng He, lead study author and a climate scientist at the University of Wisconsin, Madison. "That means early agricultural is as powerful as the whole Industrial Revolution."

However, the study concludes that the net warming caused by early humans was only 1.3 degrees F (0.73 degrees C), thanks to a slight cooling of 0.31 degrees F (0.17 degrees C) due to more sunlight reflecting from cleared land.

The new work suggests that early cultures were global warming turtles, slowly raising temperatures by adding carbon dioxide and methane (both greenhouse gases) to Earth's atmosphere over thousands of years. In contrast, post-Industrial Revolution societies are climate change rabbits, with temperatures rising about 1.53 degrees F (0.85 degrees C) between 1880 and 2012, according to the Intergovernmental Panel on Climate Change.

The study adds to an ongoing debate over the influence of pre-industrial humans on Earth's climate. While 1850 is often picked as the kickoff for global warming, human activities such as deforestation and agriculture could have shifted the climate earlier. Ice cores suggest this is the case: carbon dioxide and methane levels over the past 8,000 years don't follow their usual post-ice age trends. The gases go up as human population booms, instead of their usual decline. But some scientists say this is simply natural variability.

The idea that pre-industrial humans significantly affected Earth's climate "is still a hypothesis, but it has huge climate implications," He told Live Science. "The climate has some inertia, and what has happened in the past 150 years may not be long enough to tell us what will happen in the future." [Top 10 Surprising Results of Global Warming]

He and his co-authors estimated past global temperatures with climate models that calculated the effects of land-cover changes such as deforestation and irrigation. Their findings were published Jan. 24 in the journal Geophysical Research Letters.

The study compared climate models of a human-free Earth to a planet crawling with hunter-gatherers and farmers. The researchers used estimates of past land-use from a 2011 study led by Jed Kaplan of the Swiss Federal Institute of Technology, who built a detailed model of land-use over time based on historical and archaeological data.

After the last ice age ended, carbon dioxide and methane levels in the atmosphere should have dropped to about 245 parts per million (ppm) and 445 parts per billion (ppb) without human influence on the planet, He said. (Parts per million denotes the volume of a gas in the air; in this case, of every 1 million air molecules, 245 are carbon dioxide.)

Instead, the models suggest that carbon dioxide rose about 40 ppm, to 285 ppm, and methane jumped to 790 ppb, a 345 ppb rise, as early humans chopped down trees and irrigated rice fields.

"In terms of long-term climate change, the last several thousand years are unique because of this human factor in it," He said. "It's almost like we're on a speeding train without a brake, but we are continually putting in the coal into the engine."

Editor's note: This story was updated Feb. 7 to correct atmospheric methane concentrations to parts per billion.