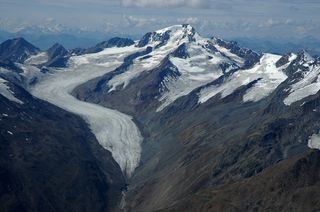 The Hintereisferner Glacier in Austria in 2006. The glacier's edge has retreated up the valley by 1.75 miles (2.8 kilometers) since 1880.
(Image: © A. Lambrecht/World Glacier Monitoring Service)

The lifetime of a glacier — an enormous slow-moving river of ice — can span many thousands of years. And while glaciers are dynamic, changes to their length and volume happen at an extremely sluggish pace.

However, over the last century a number of glaciers in mountain regions around the world dwindled significantly, diminishing in size and abandoning their farthest recorded boundaries (where they attach to land).

And a new study found with 99 percent certainty that climate change is driving their retreat, or shrinkage, with the likelihood of any other factor causing such dramatic change estimated at 1 in 100,000, the researchers found. This is the first analysis to connect individual glacier retreat to the effects of recent, global climate change. [Photos of Melt: Glaciers Before and After]

The scientists investigated 37 glaciers representing five geographic regions: Europe, Scandinavia, Asia, North America and the Southern Hemisphere. They delved into 130 years of records that documented glacier length and mass; how far the glaciers had advanced, or grew, in the past; and how much they retreated. The researchers also noted patterns in local precipitation and temperature that might have affected a glacier's size and movements.

"The big thing that we focused on was the natural fluctuations of glaciers that would have happened even without climate change," study co-author Gerard Roe, a professor of Earth and Space Sciences at the University of Washington in Seattle, told Live Science.

Roe and his colleagues applied their data to a statistical ratio known as "signal-to-noise," defining the "signal" as fluctuations driven by climate change, and "noise" as the more abundant weather-sensitive fluctuations that a glacier would normally undergo from year to year. This allowed the researchers to predict if each glacier's current state of reduced ice would have happened even without climate change.

They found that glaciers lost far more ice than could be explained by normal conditions. In some cases, glaciers retreated 10 to 15 times the distance that they would have, were climate change not a factor.

"This is an extraordinarily large departure from what these glaciers would be doing in a constant climate," Roe told Live Science.

For example, Austria's Hintereisferner glacier retreated a distance of 1.75 miles (2.8 kilometers) since 1880. According to the study, the probability that natural variations are responsible is less than 0.001 percent — 1 in 100,000.

"I was actually shocked at how far out of equilibrium these glaciers are," he said.

The study's findings represent the largest signal-to-noise ratio ever documented for global warming — "the purest signal of climate change," according to Roe. Alongside the data, the visual impact of vanishing glaciers — visible in photo comparisons that span decades — offers sobering testimony to the impact rapidly rising temperatures can have on Earth.

"These landscapes are changing before our eyes," Roe said. "I hope this is a big upgrade to our understanding of the relationship between glacier retreats and climate change."

The findings were published online Monday (Dec. 12) in the journal Nature Geoscience.