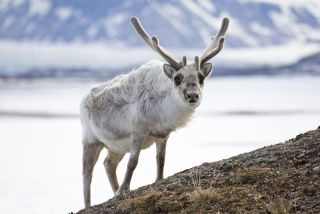 A reindeer on the Norwegian island of Svalbard.
(Image: © BMJ | Shutterstock.com)

Reindeer are shrinking, and it's not because they're on a diet for the holidays. Rather, climate change is making it difficult for them — and their gestating fetuses — to survive extreme winters, new research shows.

The findings are the culmination of a 16-year study on the reindeer living in Svalbard, a Norwegian archipelago located between Norway and the Arctic. In 1994, the adult reindeer in Svalbard weighed an average of 120 lbs. (55 kilograms), but in 2010, they weighed less than 108 lbs. (49 kg), on average — a 10- to 12-percent drop in weight, said lead study researcher Steve Albon, an emeritus population ecologist at the James Hutton Institute in Scotland.

The drop in weight was linked to warmer winters and summers, he said. Reindeer typically mate in late October and give birth in early June, he said. During the cold, dry winter months, reindeer, including those that are pregnant, forage under the snow for lichen, a slow-growing organism that's part fungi and part algae, Albon said. [6 Surprising Facts About Reindeer]

But warm winter temperatures have increasingly brought rain, not snow, Albon said. Then, when temperatures drop, the wet ground freezes like an ice rink, with the reindeer's tasty lichen stuck beneath the ice.

Unable to get to their food, hundreds, if not thousands, of reindeer die, and pregnant reindeer that survive either lose their fetuses or give birth to smaller calves, Albon said. In fact, 61,000 reindeer starved to death in Siberia following a rain-on-snow event in 2013 to 2014, according to a November 2016 study published in the journal Biology Letters.

"In the winter, over the 20 years we've been working there [Svalbard], the temperature has gone up 9 degrees Celsius [16.2 degrees Fahrenheit]," Albon told Live Science. "It's more likely that you'll get these periods where the temperatures go above freezing, and if there's any precipitation, [it later freezes]."

At first, the researchers noticed these ice-rink events happening every six years — in 1996, 2002 and 2008. But then, the icy events began happening every other year year, in 2008, 2010 and 2012, "and we realized that this was related to the warming climate," Albon said. "The Arctic is warming faster than anywhere else on the planet, especially this part of the Arctic."

Albon and his Norwegian colleagues initially visited Svalbard's reindeer to learn more about their response to parasites. As they measured and weighed the reindeer year after year to see the effect of parasites, they noticed a troubling pattern: There was a huge variation in the number of pregnant females in 1996, 2002 and 2008, the same years the ice-rink events happened. Moreover, the researchers recorded a decline in the adults' skeletal size and weight from the 1990s to the early 2000s, the researchers said.

This happened despite the warmer summers, which led to increased vegetation for the reindeer to eat. Over a 20-year period, the summer temperatures increased by about 2.7 F (1.5 C), Albon said.

"In the summer, 1.5 Celsius doesn't sound like much, but if you increase from a mean [average] of 6 degrees Celsius [42.8 F] in July to 7.5 degrees Celsius [45.5 F], you'll find you get a doubling in vegetation productivity," Albon said. "That's a very substantial change."

Despite this cornucopia of food during the summer, the winters continued to wear on the reindeer. "They were losing more weight, they were losing their fetuses, so there was fetal mortality," Albon said. [Species Success Stories: 10 Animals Back from the Brink]

In contrast, "if the winter was cold and dry, the mothers could get to the food, and the calves would be born at size and likely to be more viable," he said. "That very early growth, even in utero, dictates the rest of life."

The warmer summer adds a complication, Albon said. When Svalbard is warm and sprouting with food, reindeer are more likely to mate. That means the reindeer population is growing despite the frequent, severe ice-rink winters, he said.

It's possible that limited winter resources due to increased population may partly explain the "shrinking"-reindeer phenomenon, Albon and his colleagues wrote in their study.

For the time being, the researchers are waiting for the reindeer born in the past few years to reach age 6, when they become mature adults. Only then will the researchers have a better idea of how climate change is affecting the reindeer's population numbers, he said. However, another study, presented at the American Geophysical Union Meeting on Monday (Dec. 12), found that climate change might be responsible for shrinking reindeer populations in northern Russia.

Reindeer are hardly the only animal that is "shrinking" due to climate change. The phenomenon isn't a new one — when the planet got warmer in the past, beetles, bees, spiders and even pocket gophers also shrank, according to fossil evidence, Live Science reported in 2011.

The reindeer research, which has yet to be published in a peer-reviewed journal, was presented Monday at the British Ecological Society meeting in Liverpool, England.