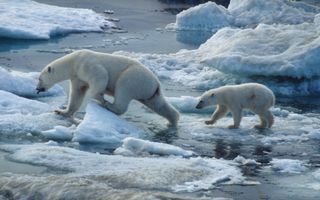 The Arctic sea ice has shrunk to new lows in recent years, due in part to human-caused global warming. This has had a direct effect on animals that live on the ice, such as polar bears. Research has linked declining sea ice with smaller body size and less reproduction among polar bears. Some scientists say we can expect to see many other organisms shrink in response to climate change.
(Image: © World Wildlife Fund)

As global temperatures rise this century, the result of human-caused climate change, many living things will shrink, thanks to a host of changes in the environment, as well as the direct effects of warming, two researchers write.

If everything were to shrink at the same rate, this wouldn't be a problem. Smaller plants would feed smaller fish that would feed smaller sharks, for example. However, it appears that organisms don't all react at the same rate, so change is likely to throw ecosystems out of whack, putting some species at risk of extinction, according to Jennifer Sheridan and David Bickford of the National University of Singapore.

This isn't a new phenomenon; during past periods of natural global warming, beetles, bees, spiders, algae called diatoms, pocket gophers and woodrats have shrunk, according to fossil evidence. For example, the burrows dug by invertebrates, including beetles, bees and spiders, during a warm spell about 56 million years ago, show the creatures shrank by 50 to 75 percent, the researchers write in a study published on Oct. 16 issue of the journal Nature Climate Change.

Some modern shrinkage is expected to come about indirectly. For example, an increasing acidity in the ocean — caused by increased carbon dioxide in the atmosphere — interferes with some organisms' ability to build their calcium carbonate shells or skeletons (such as corals, scallops and oysters). Acidification also decreases growth rates among phytoplankton, the tiny plants that float in the ocean, and this has implications for the food chains that depend on them. [Colorful Creations: Gallery of Incredible Coral]

Plants were expected to thrive on the excess carbon dioxide humans have expelled into the atmosphere, because they use it to create sugars by photosynthesis. However, things have not played out this way over the past century. Plant growth is highly dependent on water, and while climate models predict that some areas will get wetter and others drier over the coming decades, many places are expected to experience higher variability in rainfall. This means longer dry periods even in wetter regions, which will ultimately reduce growth, according to the authors.

Cold-blooded animals — most of the animals on Earth — are directly affected by changes in temperature, which increase their metabolic rates. This means they need more food to maintain their body sizes, or shrink. Temperature also affects cold-blooded creatures by amping up their development rates, so the animals reach maturity at smaller sizes. Other research has explored how this plays out in copepods, tiny crustaceans that play an important role in marine food chains.

It is established that among warm-blooded animals, a colder climate means a larger body size, because larger animals are better able to conserve their body heat, and there is evidence that size decreases in warmer regions. For humans, changes in organism size could have a direct effect on our food supply, for instance, through crops and fisheries.

There are exceptions: Climate change is expected to increase the growing and feeding season in high-latitude places, and hence allow organisms to get bigger. (An exception to the exception: Polar bears are shrinking along with the Arctic sea ice upon which they live.) Also, animals with broad diets may be able to compensate for shrinking meals by shifting their diets.

"Continued global warming is likely to favor smaller individuals, and we predict that organism size will continue to decrease over the century," Sheridan and Bickford write.