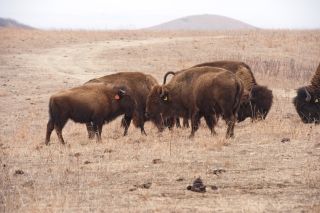 Descendents of these bison 50 years from today may be smaller in size, as a result of degrading grass quality on the prairie.
(Image: © Kansas State University)

Bison roaming the U.S. prairie may grow smaller as a result of climate change, a new study suggests.

"The difference in temperature between those two states is around 20 degrees Fahrenheit [11 degrees Celsius], which is about three times the projected increase in temperatures over the next 75 years," Craine said in a statement. "That's a pretty extreme difference and beyond the worst-case scenario. But it is a clear indicator that long-term warming will affect bison, and is something that will happen across the U.S. over the next 50-75 years."

Other grazers, like cattle, will likely face similar changes in a warming climate, Craine said. Though more work is needed to predict the extent of warming on the prairie, Craine suggests that the cattle industry could face losses of more than $1 billion within the next 75 years as a result of degrading grass quality.