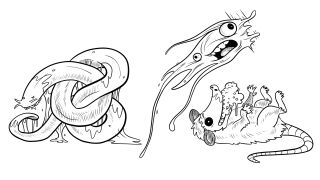 Hagfish, blanket weed and opossums are just a few of the featured characters in a new field guide to slime-producing critters.
(Image: © Illustrations by Ethan Kocak)

Goopy, sticky slime, whether it intrigues or disgusts you (or both), has more practical uses than you may expect. In fact, many animals and even plants make their own goo. Creatures might slime things up to help with reproduction, as protection against drying out or even as a defense against predators.

There's a lot to appreciate about slime and its makers, and who better to lead the curious down that slippery slope than the creators of the scientific and humorous field guides to animal grossness and weirdness: "Does It Fart?" and "True or Poo?"

In their new book, "Believe It or Snot" (Hachette Books, available Oct. 22), authors Nick Caruso and Dani Rabaiotti team up again with illustrator Ethan Kocak to bring readers the secrets of the ooze, showcasing the slimiest, most-mucous-laden organisms on Earth.

"I think it's a nice contrast to the 'majestic nature' narrative we are often sold by nature documentaries," Rabaiotti told Live Science in an email. "Animals doing gross things is often fairly unexpected and can have pretty hilarious results!"

For example, humans can produce snot in copious quantities, but other mammals far surpass us, even when we're at our snottiest. In sea lions, mucus keeps their eyes and nasal tissues moist, but the animals' sneezes are sloppy and snot-spraying, and they can launch coughed-up mucus across "great distances," Caruso and Rabaiotti wrote.

Another slimy mammal is the hedgehog, which churns up a slippery, foul-smelling froth from its own saliva that it then uses to coat its body, possibly to deter predators or to mask its scent.

"A special kind of feeling"

However, slime production in mammals is just a drop in the bucket compared with fish and amphibians, the authors told Live Science.

"I was really excited to write about parrotfish and their sleeping bags made of snot," Rabaiotti said in an email. Parrotfish, a group of 95 species in the Scaridae family, are not only covered in a layer of mucus, as are all fish; they also belch out mucous sacs every night and sleep encased in the gooey snot bags, which help shield them from parasites.

"I think it's an amazing adaptation — although I'm glad it's one we don't share," Rabaiotti said.

The slimy salamander (Plethodon glutinosus), a favorite of both Caruso and Kocak, defensively expels a type of toxic goo from its tail that adheres to human skin and is extremely difficult to remove.

"I've done research on that species. I'm very familiar with catching them and having my hand just coated in slime afterwards," said Caruso, a postdoctoral researcher at Virginia Polytechnic Institute and State University in the Department of Fish and Wildlife Conservation.

"It's a special kind of feeling," Kocak said. "It makes a film on your hand that doesn't come off."

"Yeah, it really doesn't," Caruso continued. "If it's humid or raining out, your hands are kind of slippery. But as it dries out, it gets incredibly sticky."

But all of the creators behind "Believe It or Snot" agreed that one of the top contenders for slimiest creature was the hagfish — a group of 76 species in the family Myxinidae. These eel-like fish achieved internet notoriety in 2017 when a truck carrying 7,500 pounds (3,400 kilograms) of hagfish overturned on an Oregon highway, leaving the road and a nearby car dripping with a thick coating of goo.

"In just 0.4 seconds, the small amount of goo they release from their glands can expand over 10,000 times," Rabaiotti said. "The news story about the truckload of them sliming up an entire motorway illustrated just how ridiculous the amount of slime they can produce is."

"Believe It or Snot: The Definitive Field Guide to Earth's Slimy Creatures" (Hachette Books) is available from Amazon, Barnes & Noble and other booksellers.